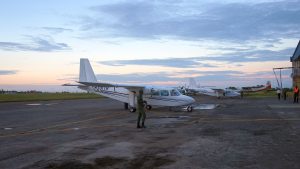 Director-General of the Guyana Civil Aviation Authority (GCAA), Retired Lt. Col. Egbert Field confirmed that the pilot informed him that there was an engine failure.

Field says the plane developed engine problems while travelling from Mabaruma to the GDF’s Air Station at the Cheddi Jagan International Airport.

He explains that it is standard operating procedure for pilots to make an emergency landing if one of the engines fails.

The GCAA Director-General says technicians went to Bimichi, conducted repairs and the Britten-Norman Islander was flown back to the Air Base.

That Islander that malfunctioned on Friday was one of two that had been purchased and arrived in Guyana in August 2018 from neighbouring Brazil. They had been operated by a Brazilian charter company, Aero Star Táxi Aéreo. At that time, their registration markings had been PT-KRO and PT-KTR.

They had been virtually stripped and overhauled before put into operation locally.