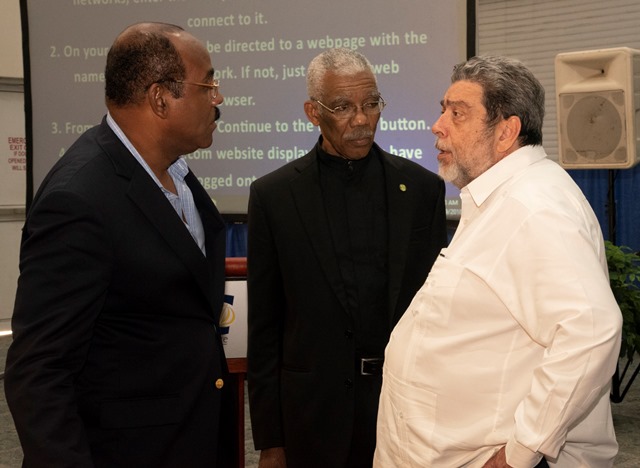 In the face of virtually no concerns about Guyana’s election machinery and actual casting of votes on March 2, 2020, Prime Minister of St. Vincent and the Grenadines, Ralph Gonsalves said the controversy over the polls was settled at the accurate recount of the the ballots and those results should be used to declare the results of the elections.

“We expect the CARICOM observer mission to deliver its report and we expect that what is the recount would be honoured and the Guyana Elections Commission would honour that recount and declare the winner in accordance with this recount and anybody who wants to challenge anything afterwards can go to court but you have to declare the winner in accordance with the recount,” he said on the state-owned NBC Radio St. Vincent and the Grenadines’ Wednesday edition of  “Your Morning Cup with Colvin Harry.” The Guyana government has at least thrice stressed that CARICOM is the most legitimate interlocutor, the scrutineers’ report would be “persuasive” and they would be depended on to say whether the elections reflected the will of Guyanese.

The Organisation of American States (OAS), which includes the 14 independent CARICOM member states, has already said the recount results should be used to announce credible results for the installation of a legitimate government.

Of the 460,352 valid votes cast, the incumbent A Partnership for National Unity+Alliance For Change (APNU+AFC) has won 217,920 and the People’s Progressive Party 233,336. The three ‘joinder’ parties- A New and United Guyana (ANUG), Liberty and Justice Party (LJP) and The New Movement (TNM) got a total of 5,214‬ votes.

Highlighting the importance of counting the votes honestly to reflect the democratic will of the people, the St. Vincent and the Grenadines Prime Minister said he was satisfied that CARICOM  would not allow the results of the recount which was properly done to be set aside.

“St Vincent and the Grenadines stands firmly for democracy and reflecting the will of the people. That will tell you where we are. I don’t have to say anything straight and plain. Caricom is not going to tolerate anybody stealing an election,” he said.

Gonsalves said no one had expressed concerns on elections day and there had been no complaints about preparations and actual voting. “Nobody said it was a sham elections, there was anything to undermine it,” he said.  In the months leading up to the now more than three-month old polls, the incumbent coalition had repeatedly expressed concerns that a bloated list of eligible voters creates an opportunity for voting in the names of deceased and overseas persons, but the PPP had argued that there had been sufficient checks and balances such as claims and objections and polling day staff.

During a visit to Guyana in March by five CARICOM leaders under the chairmanship of Barbados’ Prime Minister Mia Mottley, Gonsalves recalled her saying that every vote must count. “You had to count the votes and count them honestly,” he said.

The Vincentian Prime Minister, who seeking reelection for a fifth straight term, will next month take over Chairmanship of CARICOM from Mottley.

The three-member team of scrutineers were Ms. Cynthia Barrow-Giles, Senior Lecturer in the Department of Government at the University of the West Indies (UWI), and includes Mr. John Jarvis, Commissioner of the Antigua and Barbuda Electoral Commission and Mr. Sylvester King, Deputy Supervisor of Elections of St. Vincent and the Grenadines.

2020-06-11
Denis Chabrol
Previous: Govt Treasury has no funds to bail out Guysuco- Finance Ministry
Next: “We are not on a witch-hunt”-Irfaan Ali; political appointees “will have to face the music”- Juan Edghill