Recount results will be “credible” to install a “legitimate” government- OAS 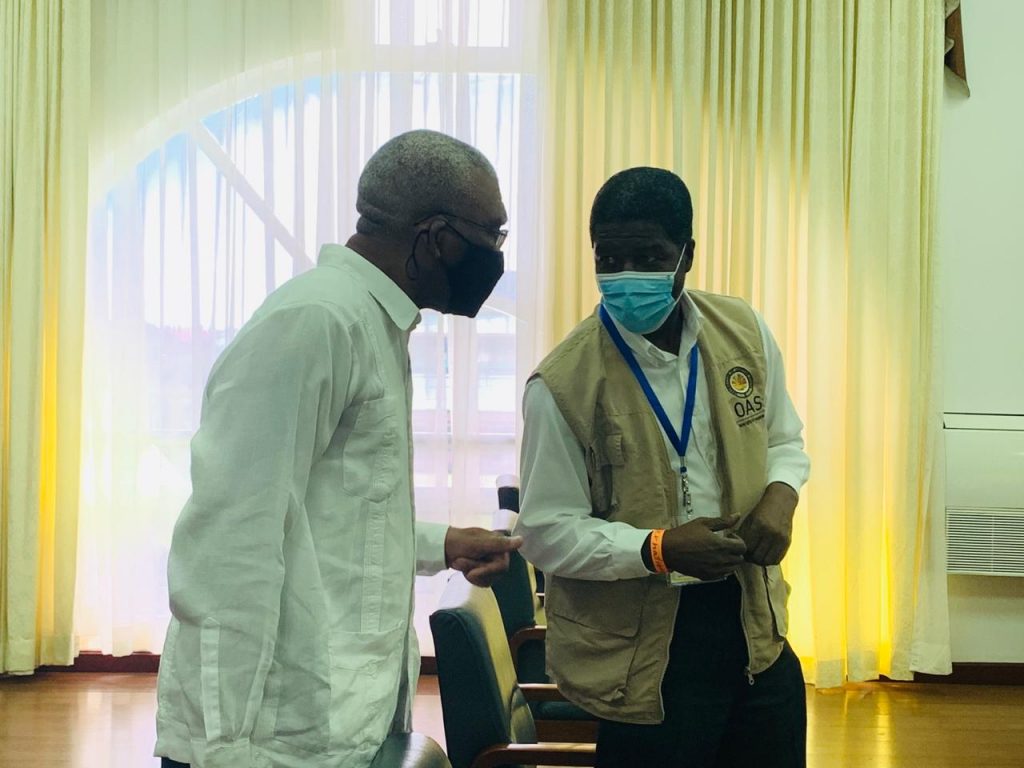 President David Granger chatting with OAS Representative in Guyana, Mr. Jean Ricot Dormeus who is an election observer at the vote recount.
Mr. Granger was in May, 2020 visiting the recount of votes at the Arthur Chung Conference Centre.

The 35-nation Organisation of American States (OAS) on Thursday said results from the nearly complete recount of votes cast in the March 2, 2020 general elections are “credible” and can be used to declare results based on the majority in a peaceful manner, in the wake of  repeated concerns by the incumbent coalition that the elections were not credible.

The OAS acknowledged that the recount has uncovered some issues but they are not unique to  Guyana’s elections. “Despite some inconsistencies in the electoral materials reviewed during the recount, as is normally the case in any electoral process, the OAS Mission has no reason to doubt that the results emanating from the recount will be credible. A declaration based on these results would lead to the installation of a legitimate government,” the OAS said in a statement.

The OAS said its International Election Observers, who have been present at the recount center  each day of the national recount, have reported that the review of the ballot boxes was conducted in a professional, transparent and impartial fashion, which allowed members of the Guyana Elections Commission (GECOM), political parties and other stakeholders to “accurately determine the results for each polling station.”

While other extra-Caribbean observers were shut out from Guyana due to COVID-19 concerns, the OAS Representative in Guyana, Jean Ricot Dormeus and a local staff member observed the exercise at the Arthur Chung Conference Centre, Liliendaal, Greater Georgetown.

The OAS’ statement, which included a call for peace, was issued the same day that the incumbent A Partnership for National Unity+Alliance For Change (APNU+AFC) said it would rely on the three-member Caribbean Community (CARICOM) team of scrutineers to say whether the recount reflected the will of Guyanese at the polls.

“The people of Guyana have been patient and they now deserve a peaceful transition of government based on the majority vote as reflected in the recount and in support of democracy and the rule of law, which all OAS member states expect to be upheld,” the OAS said. The OAS recalled that both President Granger and People’s Progressive Party (PP) General Secretart, Bharrat Jagdeo “have agreed to accept the results of the recount, as conducted by GECOM and scrutinized by CARICOM, as final.”

At the same time, the OAS registered its concerns that the GECOM has violated an agreement with the Western Hemispheric organisation’s observer mission by failing to provide Statements of Poll and other documents.

Cognizant of the several challenges experienced in the 2020 electoral process, particularly concerns about the presence of inaccurate information, the OAS Electoral Observation Mission has repeatedly requested copies of the Statements of Poll prepared at each polling station on election night, and the Statements of Recount prepared during the current process, in order to do its own analysis of the original and the recounted results. Access to these materials is guaranteed by the electoral procedures agreement signed between the OAS and GECOM on February 26, 2020. Regrettably GECOM has refused to provide the Mission with these important documents,” the OAS said.

APNU+AFC has for several weeks now expressing grave concern about alleged substitute voting in the names of dead people and others who were overseas on election day, voting without certificates of identity and oaths of identity, possible disenfranchisement of members of the Disciplined Services, missing poll (log) books, unstamped ballots, and rejected ballots.

The coalition has been saying that at least 90,000 votes have been affected by a range of alleged irregularities.