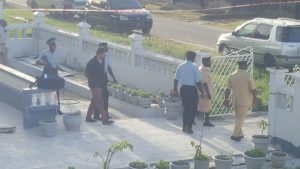 The alleged killer in black shirt and brown pants being escorted from the house by police.

The man, who was found in a house with the motionless body of a woman, will be charged with murder.

He is Rafeek Khan, the brother of a well-known computer and electronics store owner.

Police say the Director of Public Prosecutions has advised that Khan be charged with the murder of 61-year old Sattie Monica Singh -Beekharry.

Khan will be arraigned before the presiding magistrate at Vigilance Magistrate’s Court tomorrow.

An autopsy revealed that the woman died from brain hemorrhage due to blunt trauma and a broken rib.

Responding to an emergency call after neighbours heard the woman screaming for murder, police turned up at the house and forced entry. They found the woman’s motionless body.

Teargas was eventually thrown in the house and Khan, who was hiding in the ceiling, eventually surrendered.