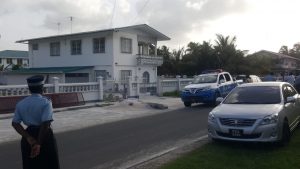 The house where the woman was found lying motionless.

The motionless body of a woman was found in a house at Atlantic Gardens, East Coast Demerara and a man was arrested Monday afternoon, police said.

A senior police officer said police received a call from a woman fior help and when they arrived on the scene they could not enter the house.

Police saw man peeping and when they forced their way into the bottom flat of the building, the woman’s motionless body was found. He was arrested.

No marks of violence were immediately seen on the woman.

Investigators are treating the incident as domestic  violence related.

Neighbours and a janitor say the suspect normally drives the woman in his vehicle.

She has been residing at Atlantic Gardens for more than 30 years and travels to and from Canada and Guyana.

2020-06-01
Denis Chabrol
Previous: GECOM apparently did not check its records before asking immigration dept for help
Next: GECOM to consider immigration records with observation reports