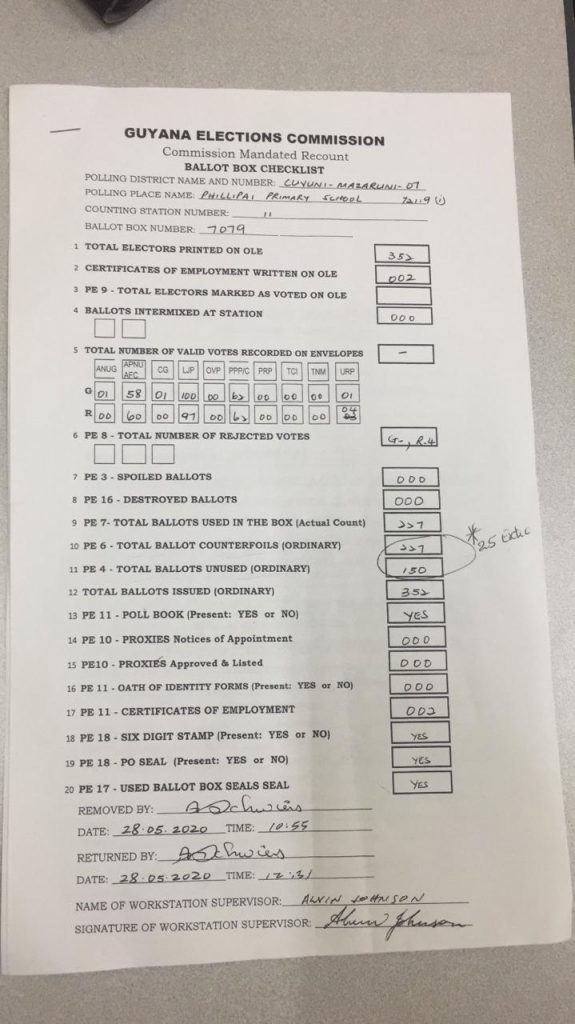 The checklist for ballot box 7079 at Phillipai Primary School

A Partnership for National Unity+Alliance For Change (APNU+AFC) says a ballot box checklist shows that 25 extra ballots were registered as having been found in a ballot box at Phillipai Primary School, Region 7, contrary to claims by the People’s Progressive Party (PPP).

The PPP is relying on the Statement of Recount for ballot box 7079 at Phillipai Primary School to deny APNU+AFC’s claim that 377 ballots were stated as having been in the ballot box,  saying that document shows 227 votes were cast of which 223 were valid and four were rejected.

However, the PPP did not say in its statement Saturday afternoon that the checklist for ballot box 7079 states that there were 352 eligible voters at the polling station,  227 ordinary ballot counterfoils and “150” unused ballots were found in the box instead of 125.

APNU+AFC said in a statement issued late Saturday night that a first observation report, which had stated that 25 ordinary ballots were subsequently issued, was corrected to state  that “352 ordinary ballots  were issued but twenty five extra were found in the ballot box.”

“This correction was made as no evidence was found for the legitimate issuance of the additional 25 ballots to the polling station,” APNU+AFC said.

The coalition did not dispute the PPP’s response to the APNU General Secretary, Joseph Harmon’s claim that the wrong list of electors was found in Ballot Box 7003. The PPP, in response, has referred to Recount Observation Report for Ballot Box 7003, which says that Ballot Box 7002 was brought out, instead of Ballot Box 7003.

The PPP quotes the observation report as saying this “resulted in a mix up” that was corrected. The PPP released a copy of the Observation Report that says “No other error was found in this box.” 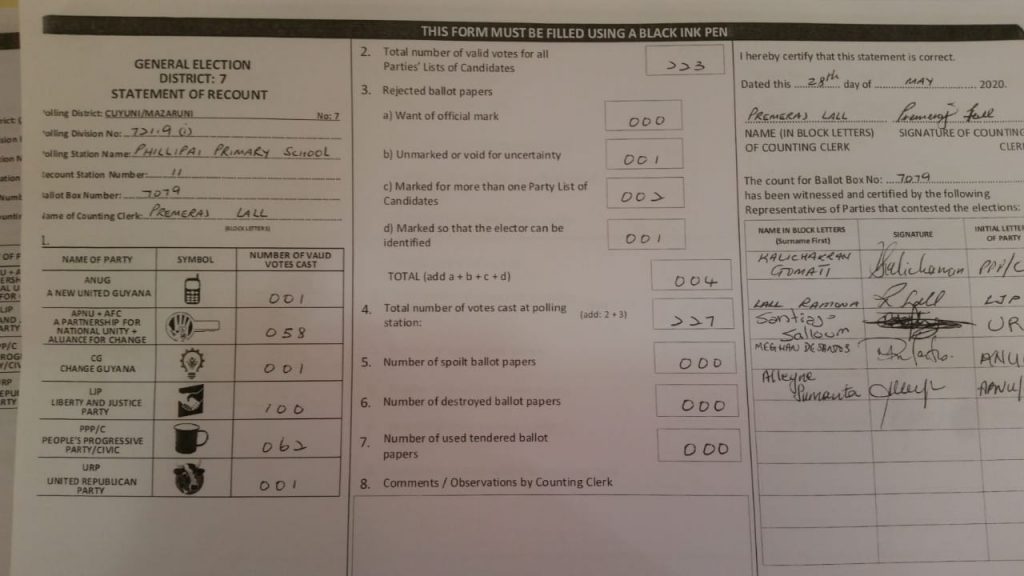 The statement of recount for ballot box 7079 at Phillipai Primary School.

The APNU General Secretary earlier Saturday called on GECOM to conduct an “urgent investigation” and provide a response before the tabulation of results for Region 7 (Cuyuni-Mazaruni) and Region 8 (Potaro-Siparuni) are announced. Unofficial results show that of the 9,592 valid votes cast in Region 7, APNU+AFC got 4,813 and the People’s Progressive Party 3,728.

2020-05-31
Denis Chabrol
Previous: No evidence to prove APNU’s claim that Joint Services votes were rejected- ANUG Chairman
Next: GECOM apparently did not check its records before asking immigration dept for help