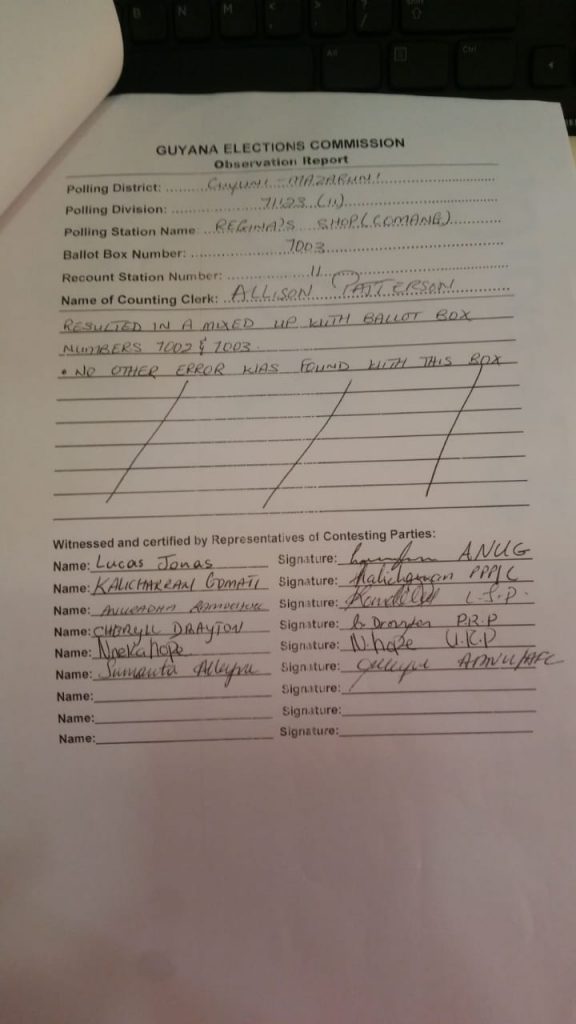 The People’s Progressive Party (PPP) Saturday afternoon released evidence to rubbish claims by A Partnership for National Unity (APNU) that there was evidence in ballot boxes of  elections fraud by the opposition.

“The increasingly embattled APNU+AFC Coalition persists in its misguided attempts to discredit the electoral process by perpetuating fallacious claims about so-called irregularities,” the PPP said in a statement.

The PPP says based on the declaration of election results prior to the commencement of the national recount, won these two regions at both the General and Regional levels.

But the PPP says the Statement of Recount for Ballot Box 7079, Phillipai Primary School, makes it clear that there were not 377 ballots in the Ballot Box.

Instead, the PPP says there were 227 votes cast – 223 being deemed valid and four being rejected ballots.

The APNU General Secretary says the wrong list of electors was found in Ballot Box 7003.

The PPP quotes the observation report as saying this “resulted in a mix up” that was corrected. The PPP released a copy of the Observation Report that says “No other error was found in this box.”

The APNU General Secretary earlier Saturday called on GECOM to conduct an “urgent investigation” and provide a response before the tabulation of results for Region 7 (Cuyuni-Mazaruni) and Region 8 (Potaro-Siparuni) are announced. Unofficial results show that of the 9,592 valid votes cast in Region 7, APNU+AFC got 4,813 and the People’s Progressive Party 3,728.