The United States (US) is calling on the Guyana government to respect the outcome of the March 2, 2020 general elections and hoped that the recount still underway would be conducted in an acceptable manner.

“We urge the government to respect the wishes of the voters, as peacefully expressed in the March 2 election. Any recount should be conducted in a free, fair, transparent, and credible manner,” Secretary of State, Mike Pompeo said in a congratulatory message to mark Guyana’s 54th Independence Anniversary.

The United States, he says,  stands with the people of Guyana who want their voices heard.

His remarks come as the incumbent A Partnership for National Unity+Alliance For Change (APNU+AFC) seeks to discredit the elections on the grounds that the opposition People’s Progressive Party engineered fraud.

The Secretary of State says Guyana’s independence anniversary is especially meaningful this year, as Guyana “stands on the brink of a new and more prosperous era,” in clear reference to the country’s emerging oil and gas sector.

Meanwhile, President David Granger stressed the importance of non-interference in the internal affairs of States, a point he had been repeatedly making at receptions by the major Western diplomatic missions in the run-up to the March 2, 2020 general and regional elections. 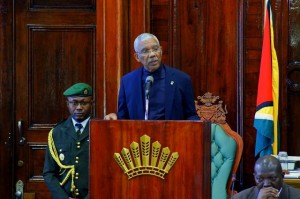 “Guyana, as a sovereign state, established diplomatic relations with scores of other states on the principles of mutual respect for each other’s territorial integrity and sovereignty, non-interference in each other’s internal affairs, respect for treaties and international law and the rejection of the use of force to settle international disputes, among other,” the President said in his Independence Day message. He again called on Guyanese to patiently await the declaration by the Guyana Elections Commission.

The Granger administration refused a number of requests by the United States for the return of Carter Centre observers to witness the recount of the votes at the Arthur Chung Conference Centre. Instead, the Guyana government has informed the US and several Congressmen that Georgetown is equally confident in the role of the three-member Caribbean Community ( CARICOM) scrutineers of the recount.

Canada, also a strong advocate of the return of the Carter Centre observers, has paid for a chartered flight to  pick up the scrutineers from Antigua, St. Vincent, and Barbados to bring them to Guyana as well as for the duration of their stay here for the 25-day recount.

From all indications, the recount will last longer than 25 days.