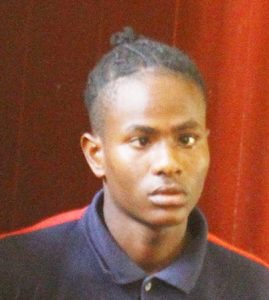 Hours after a motorcycle was early Monday morning stolen from a residence, one of the suspects was shot dead during an exchange of gunfire on police during a high-speed chase in Sparendaam

Police identified the man as Kevin “Cross-Eye” Thomas. The lawmen described him as a known character.

At the time of the incident, Thomas was riding the motorcycle that was stolen from a residence at La Bonne Intention (LBI), East Coast Demerara.

Police say as they were closing in on the suspects, the pillion rider fired a handgun at the patrol.

The lawmen returned fire hitting the cyclist and both of them fell off the bike but police said the shooter got up and escaped.

The owner of the Elite motorcycle with registration number CK 1893 has since identified the vehicle.

He told police that he was alerted of the theft by the sounds of barking dogs.

The 50-year old man said he left on a  bicycle in search of the motorcycle and saw two men  two riding it on the Beterverwagting Embankment.