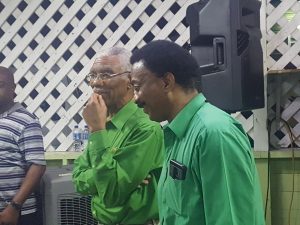 A day after President David Granger publicly stated that he would accept “any” result declared by the Guyana Elections Commission (GECOM), Attorney General, Basil Williams back-pedaled on his weekend position and on Monday categorically stated that the National Election Recount (NER)  can be used to determine the results.

“At the duly summoned meeting of GECOM the report of the outcome of the NER and the ten (10) declarations already made would give GECOM a panoramic view of the results of 2020 General and Regional Elections (GRE) and they would make the ruling, which President Granger and the Government have always maintained we will abide by,” William’s said in a statement.

He on Monday added that  “only GECOM can determine the question of the results of the NER and the results along with the report on the credibility of the elections must be submitted to it.” GECOM’S gazetted recount order provides for the commission to determine whether the data from the recount should be used by the Chief Elections Officer to submit a report to the said commission for results to be declared.

This is in direct contradiction to what the Attorney General said at the weekend. Williams had unambiguously stated that the two remaining steps in the electoral process were for the Chief Elections  Officer, Keith Lowenfield to submit his report based on the already 10 declared results to the Chairman of the Guyana Elections Commission (GECOM) for the official declaration of the results.

The Attorney General on Monday restated what he said at the weekend-  that the election law does not provide for a recount. On Monday, he added that the Constitution empowers GECOM to conduct a recount.  “I have long acknowledged that the NER is not provided for under the national elections law, but GECOM has the power to provide for it under Article 162 (1) (b) of the Constitution making it a constitutional NER,” William’s said.

The Attorney General at the weekend stressed the legality of the 10 declarations. “The electoral law has already said ten legitimate declarations have been made, they have been laid over to the CEO (Chief Elections Officer). That is the law,” William’s had said.

The Attorney General sought to assure Guyanese that he was not contradicting President Granger on the legality of the NER. “I at all material times have supported His Excellency, President David Granger in his desire to have the presence and contribution of Caricom to determine the credibility of the March 2nd, elections,” he said.

The Attorney General said that “at all material times I have asserted that the Guyana Elections Commission (GECOM) is an independent and constitutional body that cannot be dictated to by any person or authority.”

He said that as a Constitutional NER, it did not have its own procedures and GECOM could make rules for it and did not have to use the provisions of the Representation of the Peoples Act (RPA) Cap 1:03 nor the Election Law Amendment Act (ELA) No.15 of 2000 as contended for by the People’s Progressive Party/ Civic (PPP/C).

Williams said the recount was not simply a question of counting of ballots as asserted by the PPP/C but also the question of the credibility of the March 2nd, elections.

President Granger on Sunday made it clear that he would accept “any” and “whatever” result is declared by GECOM and its Chairman.

Pressed to react to Williams’  contention that the recount could not be used as the legal basis to declare the results because there was no law to support it, Granger snapped:  “As President of Guyana and leader of government it is my policy that any declaration coming from the Chairman of GECOM (Justice Claudette Singh) will be accepted by the government of Guyana. I speak for the Government of Guyana.”