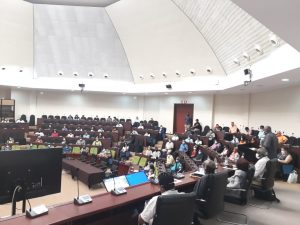 GECOM officials meeting with party representatives and observers on Wednesday just before the start of the national recount of general and regional council elections.

The highest number of ballot boxes was  recounted yesterday, Day- 8 of the national recount of votes cast more than two months ago..

Guyana Elections Commission (GECOM) spokeswoman Yolanda Ward confirmed that a total of 56 ballot boxes were recounted on Day eight, May 13, 2020.

There is the possibility that Region One (Barima-Waini) will be completed on Thursday and the recount for Region Five (Mahaica-Berbice) will begin. With six boxes remaining to count for region one, this gives way for the recount of Region Five’s 158 boxes to begin on Thursday May 14, 2020.

Region One has a total 99 ballot boxes and at close of day eight a total  93 boxes were counted.

On Day 8 a total 350 statements of recount (SOR) were tabulated for both the general and regional elections.

Meanwhile, GECOM said the COVID-19 Task Force is expected to inspect the venue for the recount, Arthur Chung Conference Centre, to ascertain whether commission can establish another five counting stations as part of overall efforts fast-track the recount of the more than 400,000 votes contained in the 2,339 ballot boxes.

2020-05-13
Denis Chabrol
Previous: Iwokrama to use high-tech drones to spot illegal miners
Next: No evidence of fire at vote recount centre- Fire Chief