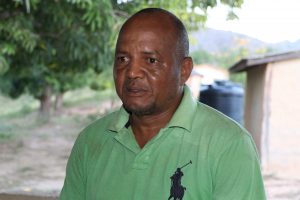 The Guyanese man, who tested positive for COVID-19, escaped from a Lethem Hospital isolation facility, and fled to neighbouring Brazil where he was caught and admitted to a hospital, a senior official confirmed.

Due to the fact that he poses a serious risk to the residents of the Lethem and other Rupununi communities, Region Nine Executive Officer  Karl Parker said the man’s identity- Hamlet Da Silva- is being disclosed to the public.

The  Region 9 senior official said Da Silva left Guyana via an illegal crossing at the “porous” border with Brazil.

He would not be returned to Guyana, Parker said, adding that Lethem doctors and their counterparts were coordinating with their colleagues in Brazil concerning the treatment that Da Silva was receiving. “He will not be returned,” Parker said.

Parker said the COVID-19 positive man had previously escaped from a hospital in Brazil and went to Guyana where he was spotted with symptoms and taken to the Lethem Hospital.

Da Silva is the first man to have been tested positive for the novel coronavirus in Region Nine (Upper-Takatu/ Upper Essequibo).