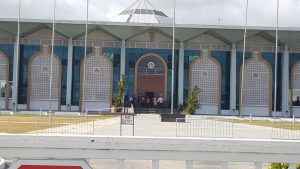 The Guyana Elections Commission (GECOM) on Saturday began reading the observation reports associated with Statements of Recount and decided to include sign language interpreters in the tabulation of results of votes cast in the March 2, 2020 general elections, sparking off a new row between allied commissioners of the country’s two major political parties.

In the area of tabulation, she said so of the 156 boxes of ballots recounted to date; general votes from 129 boxes and 115 boxes of regional votes were tabulated.

Pro-coalition Elections Commissioner, Vincent Alexander said eventually those who had insisted on counting of ballots in sequential order have since agreed to count boxes with smaller amount of votes closer to 5:30 PM in order to save time and not open a new box whose recount would take beyond the deadline.

But  pro-People’s Progressive Party (PPP) Elections Commissioner, Sase Gunraj said the recount exercise amounted to an appellate process and should not include new information merely to score political points.

He noted that on the day of poll, political parties- the PPP and A Partnership for National Unity+Alliance For Change (APNU+AFC) provided polling agents at the 2,339 polling stations. “To now come and to have the ipse dixit (unproven statement) allegation of a representative included in that observation report, I believe is a disingenuous attempt to introduce new evidence or to introduce new propaganda in a process and at a point where it ought not to be,” Gunraj told reporters.

However, Alexander said sign language would not add any time, and reading the observation reports would add very little time, in response to concerns that these new features of delivering the tabulation process would further delay the recount exercise for which 25 days have so far been set aside.

“They have a problem. They can’t be transparent as they claim they want to be . They  fought supposedly for tabulation but transmission on the grounds of transparency. If you are going to be  transparent, you have to have an equitable policy that allows the population at large. You can’t restrict it to a part of the population,” he said,

On the question of emigrants having voted, he said the High Court had already ruled that residency was not a requirement to vote. Gunraj said he was concerned that APNU+AFC was poised to use immigration records obtained by virtue of being the incumbent and a contestant.