GECOM to review deadline for recount 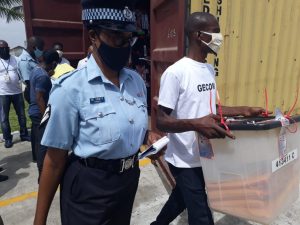 A policewoman escorts a GECOM official with a ballot box from one of the shipping containers that has more than 2,300 ballot boxes from across Guyana.

The Guyana Elections Commission (GECOM) will in the coming days review the number of days the national recount of general and regional election votes will take, based on the current rate per day and the tabulation exercise.

GECOM spokeswoman, Yolanda Ward said the commission would review this week’s work and including its 25-day timeline for the recount of the more than 400,000 votes cast on March 2, 2020.

“I know one of the very critical questions is the ability of the commission to meet that twenty-five days deadline as detailed in the order so I think it will be fair, some time next week, after the completion of week one  where the commission really has sufficient information to help in their decision making to properly address you on some of those matters,” she said.

In her mid Friday afternoon update, GECOM spokeswoman, Yolanda Ward indicated that 17 boxes were counted on Friday up to about midday , bringing the total to 83 of 2,339 boxes since the recount started at about 10:30 Wednesday morning.

In terms of the tabulation of the Statements of Recount, Ward said up to Friday mid afternoon, 14 for Region 1 were done and nine from Region 2.

The 1998 Caribbean Community (CARICOM) audit of the 1997 elections had taken three months.