The Guyana Elections Commission (GECOM) will not automatically accept the findings of the recount to declare a winner of the March 2, 2020 general elections, but will first decide whether to ask the Chief Elections Officer, Keith Lowenfield to submit a report to the seven-member body.

“The Commission shall, after deliberating on the report at paragraph 11, determine whether it should request the Chief Elections Officer to use the data compiled in accordance with paragraph 11 as the basis for the submission of a report under section 96 of the Representation of the People Act Cap 1:03;” states the recount order that was issued and gazetted on Monday, May 4, 2020.

The seven-member commission is deeply divided between the opposition People’s Progressive Party (PPP) and the incumbent A Partnership for National Unity (APNU+AFC).  Already, the PPP is accusing the GECOM Chairman, Retired Justice Claudette Singh of voting against its motions.

President David Granger, hours after the Order was issued and ahead of the outcome of the recount, said in an address to the nation that the March 2, 2020 general elections were “free, fair and orderly”.  At the same time  he pledged to accept the results when they are declared by  GECOM. “I have said, repeatedly, that I shall accept the declaration of the results by the Elections Commission, which will allow for a democratically elected government to be sworn-in to office,” he said in an address to the nation that coincided with GECOM’s issuance of the national recount order  that was published in the Official Gazette.

Granger added that, “I urge all Guyanese to be patient as we await the outcome of the national recount.”

Chief Elections Officer, Keith Lowenfield has already submitted a report of results declared by the 10 Returning Officers to the Chairman of the Guyana Elections Commission, Retired Justice Claudette Singh but she has not asked the commission to consider that report. Instead, she has held those in abeyance for possible replacement by the recount results. 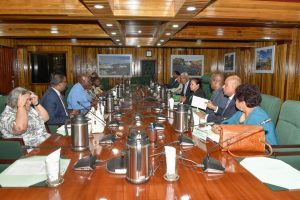 Pro-coalition election commissioner, Vincent Alexander is on record as saying that those declarations are legal. The GECOM Chairman has refused a PPP request to scrap the controversial declaration by Region Four Returning Officer, Clairmont Mingo.

Paragraph 11 of the Order states that the signed matrix will be sent to the Chief Election Officer and copies given to the representatives of political parties that contested the elections, the Caribbean Community  (CARICOM) Scrutinising Team and the Chairman and Commissioners and available to the public.

The Order provides for the  matrices for the recount of the 10 Electoral Districts to be tabulated by the Chief Election Officer and shall be submitted in a report, together with a summary of the observation reports for each District, to the Commission.

The recount, according to the Order, was in keeping with an agreement by the President and Opposition Leader with a proposal by the  Chairman of the Caribbean Community (CARICOM) for a recount to be conducted “as a means of assuaging the contesting parties and determining a final credible count.”

Granger noted said Guyanese were awaiting the completion of the recount of the ballots and the declaration of the results by the Elections Commission.

GECOM is using Article 162 of the Constitution and Section 22 of the Elections Laws (Amendment) Act, No. 15 of 2000  to remove difficulties connected with the application of the Representation of the People Act, Chapter 1:03, in implementing its decisions relating to the conduct of the aforementioned recount of all ballots cast at the said elections.

The PPP is opposed to GECOM getting into too many details in the recount such as reconciling the votes in the ballot box with the number of persons who voted are on the list, saying that to do so would be illegal and this would eventually be used to derail the process.