US, Canada ratchet up pressure on Guyana for return of Carter Centre observers

United States Assistant Secretary of State for Western Hemispheric Affairs, Michael Kozak on Sunday night called on the Guyana government to give the green light for the return of Carter Centre observers to observe the recount of ballots in general elections held two months ago.

“The United States calls on the Government of #Guyana to approve entry for @CarterCenter and @IRIGlobal
in order to ensure a transparent electoral recount. A credible recount requires robust international participation,” Kozak said just hours after the American Embassy in Georgetown confirmed that the Guyana government did not grant approval for the observers to return.

The International Republican Institute (IRI) is a pro-democracy organisation in the US.

Canada’s Assistant Deputy Minister for the Americas, Michael Grant on Sunday night welcomed the return of the Caribbean Community (CARICOM) team to scrutinise the recount but called on President David Granger to allow the Carter Centre observers to return. “We continue to watch the situation in Guyana. Glad the CARICOM mission has returned but President Granger should also immediately approve return of the Carter Center. They are duly accredited & want to complete their observation mission,”  Grant said. 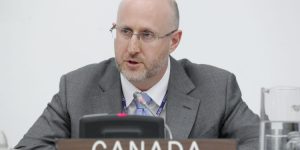 Canada paid for a chartered flight to bring the Caricom team members from Antigua, St. Vincent, and Barbados on Saturday.

The European Union’s Ambassador to Guyana, Fernando Ponz Canto has merely stated that , “openness to observers, key for democracy.”

A Guyana Elections Commission commissioner, Vincent Alexander said earlier Sunday that the observers remain accredited, but it is the Guyana government that has to grant approval for foreign observers to come to the country.

Executive Member of the opposition People’s Progressive Party (PPP), Anil Nandlall Sunday night called on major Western Nations to impose sanctions on those responsible for blocking the Carter Center observers from returning to Guyana. “US Embassy, Canadian & High British High Commissions & the EU must revoke the visas NOW of all persons responsible for denying Carter Center permission to observe the recount, including, members of the COVID-19 Task Force and blacklist them from traveling to their respective countries!,”Nandlall said on Facebook.

The United States (US) says the Guyana government has refused to give the green light for the return of Carter Centre observers on Monday, even as the United Nations (UN), Canada and the European Union added its voice to the call.

The US  Embassy  said it was informed on Saturday, May 2 that an incoming May 4 flight had been approved by the Task Force to repatriate Americans, Permanent Residents and in-transit passengers “but not the arrival of the observers.”

American embassy spokeswoman, Violeta Talandis said “there was no official response given as to why” the observers, numbering “under 10”,  would not be allowed to enter Guyana.

The American Embassy indicated on Sunday that the request has been escalated to President David Granger.

“Subsequently, we have sought reconsideration of this matter at the highest levels in recognition that the observer missions illustrate the commitment of the caretaker government and the international community to a free, fair and transparent recount process,” Talandis told reporters.

This request dates back to April 29 when, by diplomatic note the assistance of the Ministry of Foreign Affairs was sought in obtaining permission for flights on May 4, 2020 and May 30,2020.

These flights serve a dual purpose, with the inbound flight on May 4 carrying accredited international observer missions to Guyana for the recount process and the outbound flights serving to repatriate U.S. Nationals, Legal Permanent Residents and Third Country Nationals.

The May 30 flight was requested to return the observers to the United States along with U.S. citizens, Legal Permanent Residents and Third Country Nationals who wish to return to or transit to their homes.

The embassy said the inbound flight request was made on behalf of the Carter Center and the International Republican Institute with reference to other observer missions that also my wish to avail themselves of the requested flights.

“The  diplomatic note referenced the observer’s intentions to comply with the COVID-19 testing and quarantine measures,” the embassy spokeswoman said.

The Embassy said it sent a copy of the diplomatic note to the Guyana Civil Aviation Authority accompanied by a request to advance the issue to Guyana’s COVID-19 Task Force.