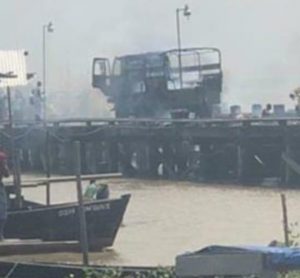 The truck that was badly damaged when pyrotechnic devices for Saturday night’s Republic Anniversary exploded while they were being offloaded on pontoon at the Coast Guard’s headquarters, Ruimveldt.

The now dead and injured Guyana Defence Force (GDF) soldiers were instructed to destroy the Chinese-made pyrotechnics that were deemed defective, according to multiple army sources.

Insiders familiar with the incident said a number of soldiers were seen hammering the explosives and emptying their powdery contents.

The GDF has so far not responded to several searching questions related to the incident. The questions were sent to the Chief-of-Staff, Brigadier Patrick West and the army’s Public Affairs Department.

Sources told News-Talk Radio Guyana 103.1 FM/ Demerara Waves Online News that instructions were given for the pyrotechnics to be destroyed based on findings and recommendations from an investigation into a similar explosion of pyrotechnics on February 22, 2020. That report had recommended that the remainder of the batch must be destroyed because they had become defective.

At the time of the February  incident, members of the Artillery Company had been offloading pyrotechnics from a truck to a pontoon at the GDF’s Coast Guard Headquarters, Ruimveldt, Georgetown for Republic Day fireworks at midnight.

Sources said at the time of last week’s incident, the soldiers were not wearing protective gear.

The GDF sources said recommendations on how to handle the pyrotechnics safely during the demolition process were not readily accessible.

The Ministry of the Presidency said the GDF has launched a Board of Inquiry (BoI) into the circumstances surrounding the incident.

The GDF was asked why were the pyrotechnics being disposed, if they weee from the same batch as that which injured eight soldiers in February, country of manufacture, were they purchased or gifted, and did they have an expiration date.

The GDF has also not so far responded to whethee investigation about the explosion in February, 2020 at the Coast Guard headquarters found that those and others were defective and if the
GDF has the capacity to safely handle and dispose defective explosives, based on the findings and recommendations into the Coast Guard incident on February 22, 2020.