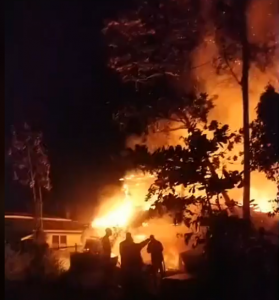 Fire Tuesday night destroyed a two-flat house at 27 Shopping Lane, West Ruimveldt, Georgetown, leaving the owner and lone occupant claiming that the destruction was the work of arsonists.

The fire started shortly before 8 PM.

Clarke told reporters and investigators that he believed that the fire was maliciously set by unnamed persons who had threatened to  burn his house because they wanted his property.

Fire fighters battled the blaze and prevented it from spreading to nearby buildings.

Clarke said the house did not have electricity and at the time the fire started he was at a shop three streets away having dinner. He said he does not cook as he buys fast food.

He said no candle or lamp was left unattended as the house was in darkness when he left for the shop.

Reporting from the scene by Sean Embrack