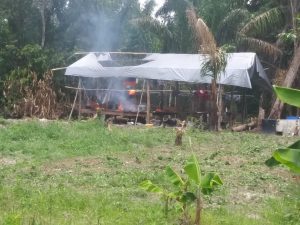 Four persons have been arrested within the past three days in connection with separate seizures of marijuana totalling more than 27 kilogrammes.

The latest seizure was made yesterday afternoon at about 2:30 at Number 59 Village Road, Corentyne.

Police say they stopped a car and found 15 parcels of marijuana weighing more than 13.5 kilogrammes

A 40-year-old resident of New Amsterdam, Berbice, who was the lone occupant of the car, has since been arrested pending charges.

And yesterday morning at about 9 o’ clock, police stopped a minibus at Mabura, Upper Demerara River and found 6.8 kilogrammes of marijuana and 89 grammes of cocaine.

The driver and another person were arrested.

And down in southern Guyana at Hunt Oil Stretch, Central Rupununi, a man has been arrested in connection with the seizure of 7.7 kilogrammes of marijuana. 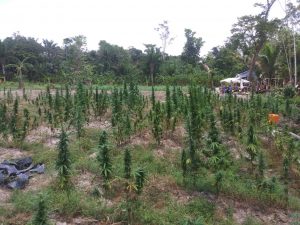 The 34-year-old man, who lives at Tabatinga remains in police custody and is expected to appear in court this week.

Police say they stopped a vehicle he was driving last Friday shortly after midday.

Meanwhile, police destroyed about 5,000 marijuana plants ranging from one foot to four feet in height. The more-than-one-and-half-acre marijuana cultivation was located at Ebini, Berbice River.

Also destroyed during the 10-hour operation were a camp and a nursery with an estimated 3,000 seedlings.