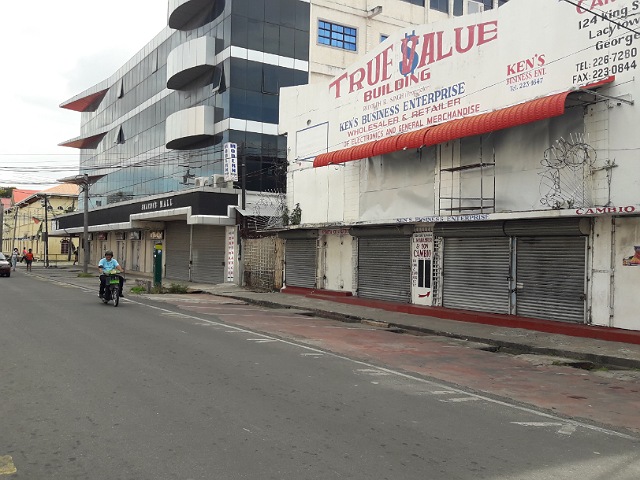 Businesses in the heart of commercial Georgetown closed Friday afternoon (3rd April, 2020) during what would normally be a period of brisk business.

Opposition Leader, Bharrat Jagdeo has called for Guyanese to be provided with emergency food supplies, in the wake of the possible closure of markets and a general economic downturn stemming from the Covid-19 pandemic.

“We believe that people should be given food. There are many vulnerable people, particularly if you move to shut down markets and other places… so that they can maintain their family while they battle through this issue,” Jagdeo told a news conference.

City Hall has, as part of efforts to combat the deadly COVID-19 coronavirus, stopped all selling in and around all municipal markets, but well-placed sources indicated that they might soon be reopened after wash sinks are installed. A central government order, however, allows for markets, supermarkets, shops and gas stations to open from 6am to 5pm.

The African Cultural and Development Association (ACDA) has also called on the government to provide relief to people due to a significant decline in economic activity, loss of jobs and loss of earnings.

ACDA has already begun providing support to a number of its members who are part of the very vulnerable groups.

Government is yet to announce any relief package for Guyanese, especially self-employed persons, who have lost earnings. Among them are hundreds of vendors on places like the busy Regent and Water Streets. Commercial Georgetown is virtually dead as most stores are closed for several weeks and most vendors have packed up and gone home.

Jagdeo said he was “very concerned” about the expected impact of several of government’s measures to curb the spread of the virus that has sickened more than 23 persons “without looking at the fallout on people’s lives”. “I know there will be some sort of disruption but these measures seem to be very haphazard and doesn’t recognise the potential impact of the virus on our country” he said.

The Opposition Leader and General Secretary of the People’s Progressive Party appealed to Guyanese to practice social distancing, stay indoors as far as practicable and do not stigmatise people.