BREAKING: Recount of votes likely as GECOM Chairman says ‘no’ to use existing declarations 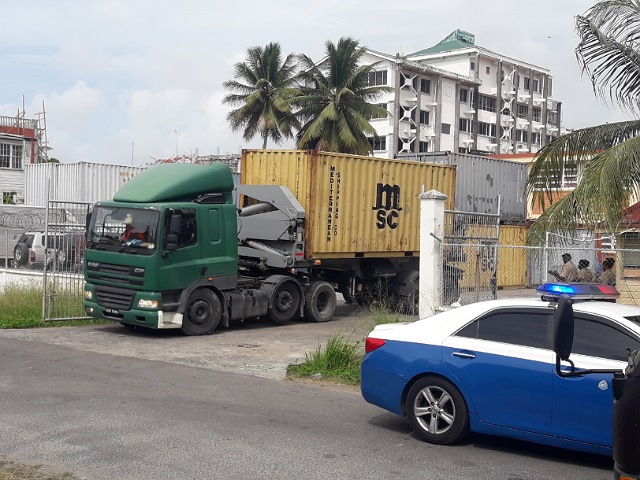 A shipping container of ballots being returned to GECOM’s headquarters on 20th March, 2020. (File photo)

The Guyana Elections Commission (GECOM) by majority appeared set to order a recount of votes cast in the March 2, 2020 general elections, as the Chairperson, Retired Justice Claudette Singh voted against the seven-member body considering a report composed of the 10 district declarations.

“Chairperson of the Guyana Elections Commission, Justice Claudette Singh provided a brief background on the Court proceedings and explained that the contempt matter brought against her has not concluded but has been shelved due to her giving an undertaking to conduct a full national recount of all votes cast in the March 2, 2020 General and Regional Elections at the level of the Commission,” GECOM said in a statement.

The commission would be meeting again on Friday at 10am, possibly to fine-tune arrangements for the recount.

GECOM also said pro-coalition commissioner, Charles Corbin has been given time to obtain legal advice and present it to the commission on Friday. “Government Commissioners contended that though the Court has discharged all the injunctions, it would be necessary for there to be some legal guidance for the Commission to conduct a recount since the Court has refrained from issuing any directions on the way forward,” GECOM said in its statement.

Pro-coalition Elections Commissioner, Vincent Alexander stated “I would say ‘yes'” when he was asked whether the commission was leading more in the direction of a recount.

He said a recount would be legal, although he Thursday afternoon tabled a now defeated motion that had included a request for GECOM to discuss the Chief Elections Officer, Keith Lowenfield’s report as a path towards making a final declaration of the results for the March 2, 2020 general elections. Alexander said there was no “impediment” to the commission considering the report and declaring the results.

Lowenfield has not yet been issued directives for conducting the recount.

People’s Progressive Party (PPP)-aligned Elections Commissioner, Robeson Benn Thursday afternoon withdrew his motion tabled in the morning for an urgent recount based on a decision that had been taken to do so in March under supervision of a Caribbean Community (CARICOM) high-level team. “It is our contention that the decision for a recount has already been taken, It is just to be implemented,” said Sase Gunraj, another pro-PPP commissioner. He added that the Chief Elections Officer had last month invited political parties and observer groups to participate in the recount, as “evidence alone that the recount was decided upon and was in the process of being implemented.”

At the heart of the controversy is a huge discrepancy between the Region Four results that have been declared by Returning Officer, Clairmont Mingo and copies of GECOM’s Statements of Poll that the PPP says it has in its possession that show that it won the elections. The incumbent David Granger-led A Partnership for National Unity+Alliance For Change (APNU+AFC) coalition has also claimed victory based on its undisclosed Statements of Poll.

Gunraj and Alexander confirmed separately that the GECOM Chairperson voted against the commission considering Lowenfield’s report. Gunraj said “This is to her credit. She has given this morning and this afternoon detailed reasons for her position in relation to this matter because she has given an undertaking to the court,” she said. He believed that once and for all the commission’s consideration of the Lowenfield Report was now “out of the door.” He did not want to say definitively what would be done with the Chief Elections Officer’s Report if there would be a recount. “We will deal with that when we get there,” he said.

Alexander said his motion for the commission to decide the way forward after existing legal proceedings are completed was also set aside.

Alexander declined to comment on whether there were discrepancies “in terms of numbers” because there is still an opportunity for people to raise that issue.