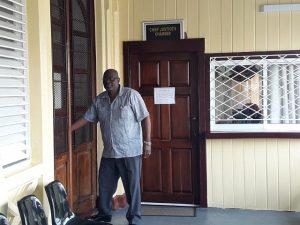 High Court Judge, Franklin Holder Tuesday afternoon ruled that he does not have jurisdiction to hear an application by Bharrat Jagdeo to set aside the declared results for Region Four.

Holder says that’s a matter for an Elections Petition and he dismissed the case accordingly.

The controversial results declared by Region Four Returning Officer, Clairmont Mingo have effectively held up an official declaration of the 2020 results and swearing in of a president.

In court to hear the decision was Chief Elections Officer Keith Lowenfield. “I’m saying I’m not hearing the judicial review proceedings,” said Justice Holder in response to a request by Jagdeo’s lawyer, Senior Counsel Douglas Mendes, to dismiss the case.

Lowenfield’s lawyer, Senior Counsel Neil Boston stated to the court that, “the court doesn’t have jurisdiction. That is the end of it. If you decline jurisdiction to hear this matter so the matter stands dismissed.”

In the end, Justice Holder said “taking advice from Counsel, I decide that the matter stands dismissed.”

Boston later told reporters that Justice Holder’s decision to decline hearing the matter now clears the way for the Chief Elections Officer to submit his report of 10 regional and national declaration of elections results to the Commission for its consideration and eventual certification of the results.

But Attorney-at-Law Anil Nandlall noted that in earlier case where the Full Court ruled that the High Court does not have jurisdiction to hear APNU+AFC candidate, Ulita Moore’s request for a judicial review of the Guyana Elections Commission’s decision to recount the votes, it is now left for that process to be done.