Police cordon off embassies in Guyana 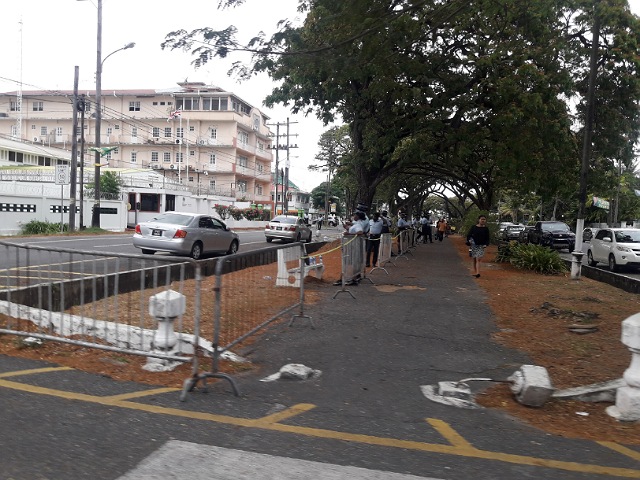 Police on Wednesday cordoned off the American, British and Canadian embassies in Georgetown.

Well-placed sources say the law enforcement agency was responding to threats against the diplomatic missions including calls for the envoys to leave Guyana.

In recent days, the American, British, Canadian and European Union envoys as well as other foreign observers have been heavily criticised for their comments on Guyana’s general elections. Those diplomatic missions have jointly criticised the tabulation of votes cast in Region Four, saying that that ultimately affected the credibility and transparency of the results which can lead to consequences including Guyana’s isolation from the international community.

Among those criticising the observers has been President David Granger. “Statements following the events of 4th March by the observer missions also created uncertainty in the minds of the citizenry,” he has said.

Minister of Foreign Affairs Karen Cummings had also indicated to the foreign observers and top western diplomats that she had been told to revoke their accreditation but she had disagreed.

That comment had, nevertheless, been regarded as a threat.

Last week, several foreign observers had also been blocked by pro-government supporters from entering the Guyana Elections Commission (GECOM). A number of media personnel were also sexually harassed and verbally abused by supporters who were a short distance away from GECOM, while police on duty turned a blind eye.

The incumbent A Partnership for National Unity+Alliance For Change (APNU+AFC) co-campaign manager, Joseph Harmon has since distanced the coalition from those actions which he also condemned.

The Guyana Press Association (GPA) had also issued a sharply-worded statement, holding, among others, the Guyana Police Force, responsible for any harm that might be meted out to media practitioners on the protest line.

The African Cultural and Development Association (ACDA) had also accused the western nations and observers of attempting to recolonise Guyana, as well as making irresponsible and unhelpful statements.

A number of APNU+AFC supporters taunted an observer as she was leaving GECOM. Protesters queried why the observers said nothing about the violent unrest in Berbice last week and said the female observer there needed to leave because she was carrying the deadly Covid-19 virus.

“They got coronavirus,” a pro-coalition supporter said. When it became apparent that a few of the protesters were following the observer closely behind, two uniformed policemen quickly ran behind as she entered a waiting vehicle.

Similarly, the APNU+AFC supporters booed GECOM Commissioner Gunraj and PPP agent Sasenarine Singh as they followed them to their waiting vehicle at High and Barrack streets.