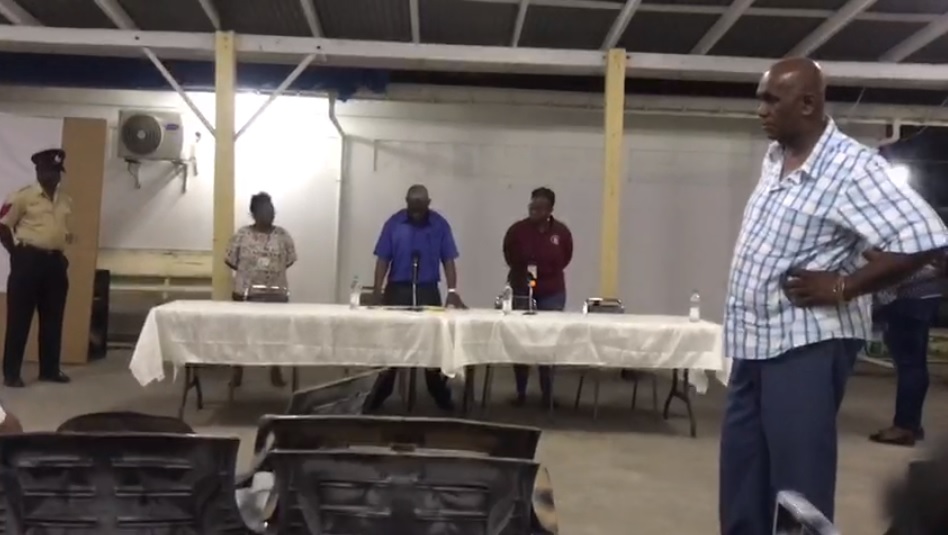 The Region Four results declared Friday night differ slightly from those that were subsequently scrapped by the High Court earlier this week. Those stated that APNU+AFC got 136,335 and PPPC 77,258.

Now that the declaration for Region Four has been made, they have to be submitted to the Chief Elections Officer, Keith Lowenfield who will prepare a report and submit it to the seven-member commission for consideration and approval. If all goes well, David Granger will be sworn in for a second straight term by next week.

When reporters were invited inside by the GECOM Public Relations Officer, Yolanda Ward, the declaration was already made and Mingo departed.

Almost immediately, GECOM Election Commissioner, Robeson Benn expressed concern about whether, like in 2015, the Returning Officer would be located to deliver requests for a recount which is provided for under the law. He said most of the statements of poll were displayed on a projector and could not be seen properly. He also said the documents could not have been authenticated because they were displayed by projector.

With the stage now seemed well set for Granger to be sworn in, the international community has already indicated that the Guyana government would not be recognised. “This is indeed an extremely flawed process and our country will be fraught with difficulty to get over this problem,” Benn said.

Asked to explain why Friday night’s tabulation process was not fair and credible, Benn said the Statements of Poll could not have been seen properly and could not have been authenticated by an ultraviolet light. “The process is fraudulent, is flawed and in addition there was an expectation that we would have started from the top… There was a request to start over from the first SOP,” he said.

At about 10 pm Friday, United States Acting Assistant Secretary for the U.S. Department of State’s Bureau of Western Hemisphere Affairs, Michael Kozack said that “Democratic nations can’t ignore this blatant disregard for rule of law. The world is watching. There is still time. Respect the will of the Guyanese people to choose their leader.”

In #Guyana, no transparent recount of votes. The @OAS_official mission has withdrawn.

The world is watching. There is still time.

Respect the will of the Guyanese people to choose their leader. https://t.co/HlD6BQMb9b

The Organisation of American States (OAS) election observer mission on Friday said it would be pulling out of Guyana because the tabulation process for Region Four is unlikely to produce overall results that are widely accepted.

The United States, Britain, Canada and the European Union earlier Friday cautioned that if a President is sworn in with a cloud of suspicion over the results, Guyana risked being isolated.