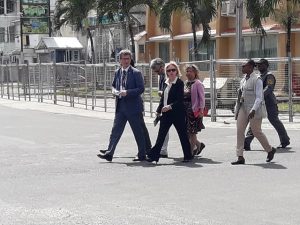 This story is being updated…

Returning Officer for Region Four, Clairmont Mingo Friday morning began using Statements of Poll to tabulate results for the March 2, 2020 general elections, ahead of a contempt of court proceedings.

Nigel Hinds of Change Guyana political party accused the Guyana Elections Commission (GECOM) of being complicit in stealing the elections and raping the democracy by inflating votes for A Partnership for National Unity+Allliance For Change (APNU+AFC). Hinds said that a clerk, in the presence of the Returning Officer, continued to read the purported results without entertaining objections.

Sources close to the People’s Progressive Party (PPP) say after a more-than-half-hour meeting with representatives of political parties and observers, Mingo began using the Statements of Poll.

Of the 879 polling stations, 421 have already been tabulated and 458 are remaining. The Citizenship Initiative’s Rondha-Ann Lam earlier Friday said that the Returning Officer had decided to restart the process rather than continue.

Mingo and others of GECOM are expected to personally appear in the High Court in a contempt of court proceedings brought against them for failing to use the Statements of Poll but instead using a pre-prepared spreadsheet on Thursday.

That tabulation process was suspended on Thursday due to strenuous objections, paving the way for GECOM Chairman Claudette Singh to obtain and study the Chief Justice’s decision on the substantive matter.

Police have cordoned off streets around the Region Four Returning Officer’s Office located in the Ashmin’s Building at High and Hadfield streets. GECOM is no longer using the front door but a western side entrance to the building.

Unlike Thursday, diplomats were allowed to observe the tabulation process.

This story is being updated…