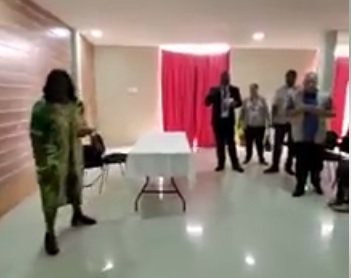 International and local election observers told the Minister of Foreign Affairs, Karen Cummings that they felt threatened by her remarks that she was told to take away their accreditation.

Although Cummings said she did not agree with that suggestion which was “in my ear”, the observers told her bluntly that they felt threatened.

“They said you have to take away the accreditation and I said no I cannot do that,” she said in the recording posted on Dr. Frank Anthony’s Facebook page. “I am saying I wasn’t in agreement with that,” when told that by an observer of the Guyana Bar Association, Selywn Pieters that her remarks amounted to a threat.

“It does not take away from the fact that you made a threat that you were told to take away accreditation,” she said.

Reacting, in a higher level of voice, the Foreign Affairs Minister insisted that “I wasn’t in agreement with that.”

That remark was among several contained in just-released video of a meeting between Cummings and representatives of the International Observer missions last week.

President of the Guyana Bar Association, Teni Housty called on Cummings to leave. Cummings apologised briefly even as she was handed a mobile phone by Deputy Chief Elections Officer, Roxanne Myers. Cummings was heard telling the other person that “I am coming out.”

Cummings said she had just passed around to appeal for “good sense to prevail”, a comment that irked Arthur. He recalled praising the electoral process, but if he had to speak again it would be ‘departure from what I expect.’ He questioned whether the delay in verification of results before declaration was “good sense”.

An unidentifiable woman was heard saying “unacceptable”. “Why were we invited to come here to speak and be threatened to take our badges away if we don’t conduct ourselves properly? This is unacceptable,” the woman said.

Quinn was heard querying from the Foreign Minister whether it was right for her to meet with the observers and diplomats in the Region Four Returning Office of the Guyana Elections Commission. “This is the GECOM building. Is it appropriate for you to be having this meeting with us in this building?” he asked.

The Foreign Affairs Minister, in her initial remarks, cautioned the observers and diplomats that “I don’t want any aggravation of the situation” by statements that were being made by the observers without giving her A Partnership for National Unity+Alliance For Change an opportunity to respond. “I don’t expect persons to make prejudicial statements without having the facts,” she said.

But Quinn said, “the fact is that you people are going around saying things.”

Housty was very upset with the Foreign Minister when she said, in response to concerns about the non-verification of results for Region Four, that Guyana was yet to catch up technologically with the rest of the world. “We cannot use time and separation of supposed development as an excuse for Guyana. There is a process and the process needs to work,” he said.

The United States, Britain, Canada, European Union, France as well as international observers from the Caribbean Community, Carter Centre, Commonwealth, European Union, and the Organisation of American States have collectively called on the Guyana Elections Commission to abide by the law in verifying the results of Region Four before they are declared.

The opposition People’s Progressive Party (PPP) believes that it will be declared the winner of the March 2, 2020 general elections if GECOM verifies and declares the results in keeping with the law.