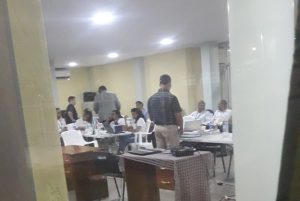 PPP representatives in the room at the Region Four Returning Office where the verification of Statements of Poll is being conducted.

Four days after general and regional elections were held in Guyana, the declaration of results for Region Four (Demerara-Mahaica), the country’s largest administrative region, has suffered a major delay, although People’s Progressive Party (PPP) representatives were pre-dawn Thursday cautiously optimistic that the verification of results will begin by 9am or 10am.

The delay was as a result of three work stoppages by GECOM staff from Wednesday night into early Thursday morning, due to reportedly saying they were tired and could not work anymore.

In one instance, several political parties alleged that a spreadsheet, instead of statements of poll, was giving 100 or more votes to A Partnership for National Unity+Alliance For Change (APNU+AFC) in several instances. Chief Elections Officer, Keith Lowenfield said Wednesday that a number of arithmetic errors had surfaced.

The spreadsheet was later abandoned and they eventually restarted the verification exercise of statement poll-to statement poll comparison among the GECOM staff and PPP representatives.

But, more delays were yet to come in full view of local and international observers.

Representatives of the PPP, Liberty and Justice Party, and A New and United Guyana all confirmed that on the third occasion, the GECOM Deputy Returning Officer, who said he was tired, took a flash drive containing verification data to a laptop. No known representative from the APNU+AFC was seen staying through Wednesday night or Thursday morning and the police was called in.

No one knows who called in the police but Divisional Police Commander, Assistant Commissioner, Edgar Thomas led a team of detectives early on Thursday morning to GECOM’s Region Four Returning Office at High and Hadfield streets to probe the occurrence.

However, Commander Thomas said the police did not want to become involved GECOM’s affairs and it was for the Chief Elections Officer to advise him. PPP activists said the GECOM Deputy Returning Officer had used an Acer laptop but he produced a Dell laptop to police. The Acer laptop subsequently surfaced.

Minutes after arriving in a police patrol vehicle, Mr Lowenfield told the PPP representatives that, in light of their concerns about altered data on the flash drive, that document will be printed and cross-checked with the Statements of Poll. “We have a commitment from the CEO that we will get a printout of what has been done so far.

Shortly before 5am, Anil Nandlall, an executive member of the PPP assured that “We will also get a printout of (East Bank, East Coast, Georgetown) results when they are completed and, of course, for each party to verify, authenticate, check, examine those reports and once they are found to be acceptable, they will be merged into an aggregate report that will constitute the RO’s (Returning Officer’s) report to be transmitted as the results in this region to the Chief Elections Officer as is required by law.”

Co-campaign manager of APNU+AFC Joseph Harmon accused the PPP of descending on the building with gunmen and threatening workers. “I think this is a very serious act on the part of the PPP and is likely to damage the credibility of the information which is coming out of that facility. Certainly it is something, which as a government, we condemn in the strongest possible terms and Mr (Irfaan) Ali and nobody should feel they have the right to barge into a facility and demand information and threaten the persons who are working”. He called on police to clear the building.

While there overnight no one complained of having been threatened. Police, who were on duty, were at no time called inside the building to address any allegation of threatening behaviour.

Senior PPP members, however, told reporters there that GECOM had asked them to leave the building as they had wanted to lock up the premises and leave. The politicians said they stood their ground and the facility remained opened with GECOM officials present.

Assistant Police Commissioner Thomas told News-Talk Radio Guyana/Demerara Waves Online News at about 7:33am that he did not receive any report that GECOM staff members were threatened by PPP activists after they refused to leave the building.