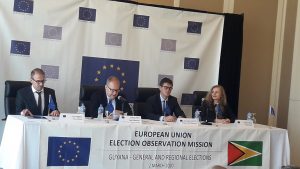 The European Union (EU) election observation mission on Wednesday raised concerns about the financing of the 2020 election campaign by Guyana’s two major political parties and their use of state resources in the run-up to polling day.

Head of the EU Observer Mission, Urmas Paet said “one of the most problematic” issues was political and campaign financing. “Here is complete lack of transparency,” he said, despite small unenforced aspects of legislation.

He urged Guyanese authorities to craft legislation to ensure transparency on the limits of and who can finance election campaigns.

Paet said that in the run-up to the March 2, 2020 general elections, the incumbent A Partnership for National Unity+Alliance For Change (APNU) evidently used State resources nationally, and the opposition People’s Progressive Party did so at the regional administration level.

In a preliminary statement, the EU Observation Mission noted that there was “misuse of state resources by the ruling coalition” by taking advantage of incumbency to appeal to voters through development programmes. “The mission saw governmental donations provided in the context of APNU+AFC campaign events in particular in Region 9.

“To a lesser extent, the PPPC was also observed using state resources at regional level. In-kind vote buying in indigenous communities was a widely reported practice of both APNU+AFC and PPP/C,” the EU said.

The EU Mission also pointed an accusatory finger at the Guyana Elections Commission (GECOM) for doing nothing to manage campaign financing. “With implicit consent of the main contenders, GECOM does not assume its oversight responsibility to monitor campaign finance,” the EU Observer Mission states.

Well-known Guyanese oil and gas lawyer, Nigel Hughes had almost three years ago warned that oil companies could fund election campaigns in Guyana. “If I am sitting down and I am a billionaire in the world and I want to control the oil that’s coming out of Guyana because the resources they have found here are the largest they have ever found in the last 20 years, it would take me nothing to take 15 million (US) dollars, create a political party or back a political party and I will then own the natural resources of the country so you can be bought, ladies and gentlemen, or your leaders can be bought for as little as 10 million US dollars,” said Hughes who has been paying very keen interest in the oil and gas sector.”

The Organisation of American States (OAS) had more than 10 years ago hosted representatives of the People’s National Congress Reform (PNCR) and the People’s Progressive Party (PPP) at a forum on campaign financing in Barbados. However, both parties had left that meeting reluctant to agree to the disclosure of campaign financiers and amounts.