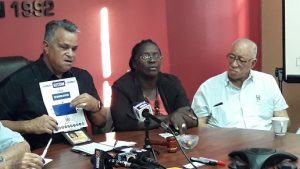 Even as the Private Sector Commission (PSC) expressed worry about the delay in delivering timely results of Monday’s general elections, the Organisation of American States (OAS) Observer Mission recommends that Guyana develops a high-tech system to receive and publish results in one or two days.

It is now running into the second day since Guyanese voted in the March 2, 2020, general and regional council elections.

PSC Chairman, Gerry Gouveia said despite assurances by Lowenfield earlier Tuesday that GECOM’s administration was not blocking the declarations by the 10 regions/districts, the Returning Officers have not declared their results.

Demerara Waves Online News-NewsTalk-Radio Guyana was reliably informed that regional declarations are not made without approval from the Chief Elections Officer. The umbrella business organisation says it had hoped that regions 3, 4, 5, 6 and 10 would have been declared Tuesday and 1, 2, 7, 8 and 9 would have started Tuesday morning to pave the way for announcements. “We are extremely concerned that the process is very delayed and we don’t have a reason why this is happening,” Gouveia said.

The PSC’s head of security and governance, Retired Major-General Norman McLean feared the impact of continued delay in declaring the results. “The longer it takes for this decision to be made, the results to be known is the more likely, as has happened in the past, that there will have problems,” McLean said.

Although Tuesday is not a holiday, most businesses in the commercial heart of Georgetown remained closed and workplaces allowed their staff to go home at midday because of possible unrest when the results are known. “The entire city is still shut down and that is not good for Guyana, it is not good for our economy and one of the reasons that the private sector is so involved in this process is particularly for our businesses to grow, for our employees…we need to do it in a stable environment where political stability and general public safety and security is paramount,” Gouveia said.

Head of the OAS Observer Mission, Orette Bruce Golding, minutes before the PSC’s news conference hoped that the results would be declared in the shortest possible time. Golding announced that the OAS recommended that a secured high-tech system be developed to receive and transmit results from locations across Guyana. “We are of the view that technology can be much more helpful,” he said. Golding said the suggested system would entail the collection and transmission of images of the Statements of Poll and collated results from regional locations to a central server located in Georgetown. He said such an approach would allow Guyana to implement a more modern tabulation system for the efficient delivery of preliminary results. “We, therefore, recommend that the elections commission should consider implementing a system to issue preliminary results of national elections in order to make this information available on election day or on the morning the day after,” Golding said.

The Head of the OAS Observer Mission added that official tabulated election results should be available online through GECOM’s website to ensure faster and simultaneous transmission to a wider audience including political parties, media and citizens. “This would promote the transparency of the election results,” he said.