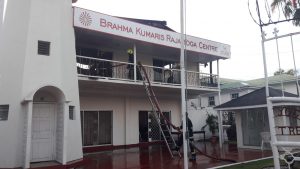 Two women, who are members of the organisation, were in the building at the time of the fire.

Despite initial problems with accessing sufficient water and a steady northeast wind, firefighters contained the blaze to one building.

Fire Chief, Marlon Gentle says firefighters are still trying to ascertain the cause of the fire. He said 912 received calls at about 4:34pm. “A lot of damage on the ground floor from water and the fire fighting activities. The upper floor for all intents and purposes is heavily gutted. We cannot say so far what would have been the cause of this fire,” Gentle told reporters. 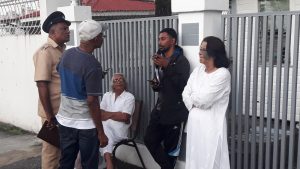 Members of the European Union (EU) election observation mission, whose operations are located in a newly-constructed building immediately north of the Raja Yoga Centre, also arrived on the scene.

Firefighters were expected to visit the building, at the request of the EU mission. The building was subjected to intense heat from the fire.