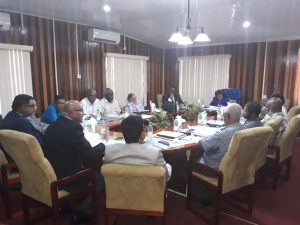 The Guyana Elections Commission (GECOM), by a majority decision on Tuesday, has instructed the Chief Elections Officer, Keith Lowenfield to establish 12 additional polling places in order to address concerns by the opposition People’s Progressive Party (PPP) that there would be confusion and congestion on election day.

“That means there will not be that congestion at the two polling places – Mon Repos Primary and Mon Repos Nursery… Some of the polling stations will be used from those two schools to other locations,” he said. Gunraj said at this time no decision has been taken to use private residences but GECOM could possibly use tents.

The decision by GECOM came several hours after the seven-member electoral management authority held three hours of talks with a five-member PPP delegation led by its General Secretary, Bharrat Jagdeo.

GECOM envisages that just about 400 persons will vote at each polling station.

Mr Jagdeo says the number of polling places at private residences was reduced mostly in PPP strongholds instead of those for A Partnership for National Unity+Alliance For Change (APNU+AFC).

The Private Sector Commission and the Federation of Independent Trade Unions of Guyana have been backing calls for GECOM to reverse its decision not to use several private residences as polling places.

The GECOM Chairman says the decision was based on a recommendation by the Carter Centre in its observation of the 2015 general election. In its recommendations back in 2015, the Carter Center report states that “Because of the lack of state establishments in some areas, 166 of Guyana’s 2,299 polling stations are located in private buildings and residences. While the establishment of polling stations on private property did not seem to negatively influence public confidence in the electoral process, GECOM should ensure that citizens can cast their ballot in a neutral environment.”

The PPP has said if the polling stations are confined to government-owned buildings, voters will have to travel long distances and this will be a recipe for confusion and congestion at polling places.