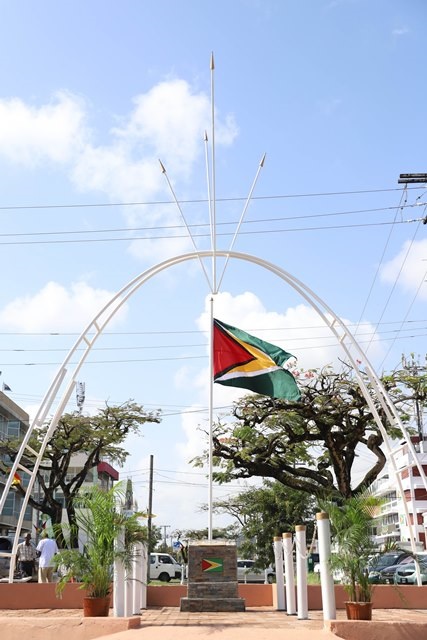 The Republic Arch on Church Street and Avenue of the Republic.

As Guyana prepares to celebrate its 50th anniversary on February 23 as a Republic, the Republic Arch in the capital city, Georgetown, was recommissioned.

The Ministry of the Presidency’s Department of Social Cohesion recently rehabilitated the landmark.

Prime Minister Moses Nagamootoo on Friday noted that the arch – a symbol of national pride – was situated amidst historic architecture including the Georgetown City Hall and the St. George’s Cathedral.

“This arch is located, in the midst of history, in the midst of cultural symbols and of course heritage buildings of the world and so as we look around and look at our parks and cultural sites I want to say that this too, this arch is yet another symbol of our growing national pride,” Nagamootoo was quoted as saying in a dispatch by government’s Department of Public Information (DPI).

Nagamootoo noted that the rehabilitation of the arch was part of the government’s plan to restore Georgetown to its former glory.

“Over the years, the Republic Arch has enhanced the beauty of Republic Avenue and its environs. It is with pride that I say that the government has restored our capital city to the state it is today, not a garbage city, but a Garden City.” 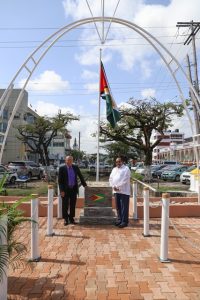 Prime Minister, Moses Nagamootoo and Minister of Social Cohesion, Dr. George Norton at the recommissioning of the Republic Arch on Avenue of the Republic and Church Streets, Georgetown.

The Prime Minister added that the construction of arches at the capital’s entry points at Cummings Lodge and Agricola were critical parts of the restoration efforts. Major roadways were also constructed, rehabilitated, and equipped with sidewalks, and overhead pedestrian passes with lifts. Visibility on the roads was also improved with the installation of streetlights.

“Guyana is being transformed into a modern country, and the window to our new world is our capital city, Georgetown. The recommissioning of this arch, therefore, is more than just an event; it is a symbol of our new pride and our status as Guyanese republicans.”

The Republic Arch was erected in 1970 in observance of Guyana attaining Republican status, four years after the country gained political independence from Britain on May 26, 1966.

Previous: OPINION: How I plan to vote and why
Next: Soldiers injured in fireworks explosion