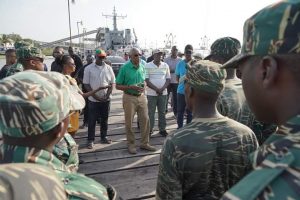 President Granger speaking with soldiers at the Coast Guard headquarters, Ruimveldt where nine soldiers were injured in a fireworks explosion.

President David Granger Saturday afternoon said a fireworks explosion that injured nine soldiers was not expected as they are highly trained and safety measures were used.

“The Defence Board and the Defence Force will ensure that every possible measure [is in place] for the recovery of the injured soldiers. I have spoken with the families. It is something which is completely unexpected, particularly because of the level of training and the soldiers involved,” the President was quoted as saying in a Ministry of the Presidency news release. 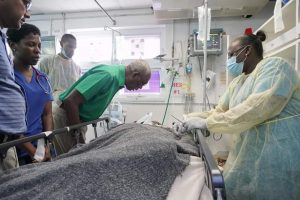 President Granger speaking with one of the injured soldiers at the Georgetown Public Hospital.

Granger assured that everything would be done to assist the soldiers in recovering. “We will do everything possible to ensure all the injured soldiers return to full health,” the President said while describing the incident as “unfortunate”.

The President visited the injured servicemen at the Georgetown Public Hospital, spoken with their relatives and doctors as well as visited the scene of the explosion at the Coast Guard headquarters in Ruimveldt.

The GDF said the soldiers were preparing for the firework display when there was spontaneous combustion at approximately 13:30 hours aback the Force’s Coast Guard location at Ruimveldt. That combustion resulted in a number of pyrotechnic devices being destroyed and rendered unusable.

Noting that the soldiers are not untrained but are experts who have been repeatedly loading and discharging pyrotechnics, Granger said safety was a feature of their work. “…The Chief Fire Officer and the Chief of Staff are both going to conduct an investigation to find out what happened. As far as we are concerned, we always apply the best safety measures to ensure Soldiers’ lives are not in jeopardy and we are trying to get to the bottom of it,” President Granger assured both the media and relatives of the injured.

He noted that several of the soldiers had travelled to Barbados to conduct fireworks display there for that country’s 50th independence celebrations.

President Granger said both the GDF and the Guyana Fire Service will conduct investigations into the incident.

The Commander-in-Chief said at the time of the explosion, the ammunition was being loaded onto barges while noting that “something obviously went wrong and it might have triggered a chain effect. It is not as if there was any form of carelessness. We are doing our best for the soldiers now at the hospital.”

Chief of Staff of the GDF, Brigadier Patrick West explained that the ranks of 21 Artillery Company conducted rehearsals on Friday at 22:00h “and during that time we had no challenges. It was well done and we were satisfied at the end of the rehearsal, last evening, that we could have done the display today.”

“As they [soldiers] were preparing for the display today, they encountered some challenges and there was some form of spontaneous combustion which caused the resulting injuries. I have ordered a BoI [Board of Inquiry] to get to the bottom of it and to determine what measures we can take to ensure there is no reoccurrence,” Brigadier West said while thanking both the Fire Service and the Emergency Medical Services for their prompt response.

Brigadier West said that all soldiers who were present and working with the 21 Artillery Company will also receive medical care in order to ensure they are not suffering from trauma.