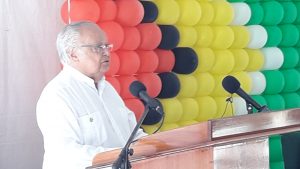 A leading member of Guyana’s legal team in the world court’s case on the border controversy with Venezuela on Thursday appealed for national unity as the country heads into general elections and prepares for oral hearings in The Hague in the Netherlands.

Sir Shridath Ramphal, who is one of the two persons authorised to act on behalf of the Guyana government at the case before the International Criminal Court (ICJ) ahead of oral hearings scheduled for March 23 to 27, calls for Guyanese to emerge united from the results of the March 2 general elections, having regard to the tension during the closing days of a national election and the days immediately after as election results are declared.

“Those days are fractious ones in any democracy and Guyana is not immune from this. But we do have a greater need than usual to demonstrate to the world that our national motto; One People, One Nation, One Destiny, describes us and does proclaim how elemental that oneness is to our One Destiny,” he said. 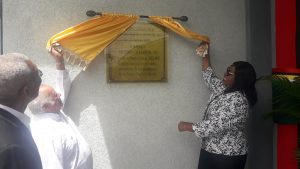 Sir Shridath says Guyana needs to display a united front as the ICJ deliberates on Guyana’s case that Venezuela has no grounds on which to claim the Essequibo region’s land and maritime space. “The proceedings on the 23rd of March in The Hague will be about that destiny. It is my plea to all our fellow Guyanese that between now and then, we do nothing to impair that destiny,” he said.

Guyana wants the ICJ to reaffirm that the 1899 Arbitral Tribunal Award that settled the land border with Venezuela is full, final and perfect, in an effort to settle the controversy that has over the years seen Venezuela object diplomatically and militarily to Guyana’s exploration and exploitation of its natural resources onshore and offshore Essequibo.

Sir Shridath, who was Guyana’s first foreign affairs minister, made the remarks at the recommissioning of an office complex of the Ministry of Foreign Affairs in his name – Ramphal House.

Ramphal House is the seat of the Protocol and Consular Divisions of the ministry and the Foreign Service Institute which he described as “the intellectual seedbed of the foreign service.” 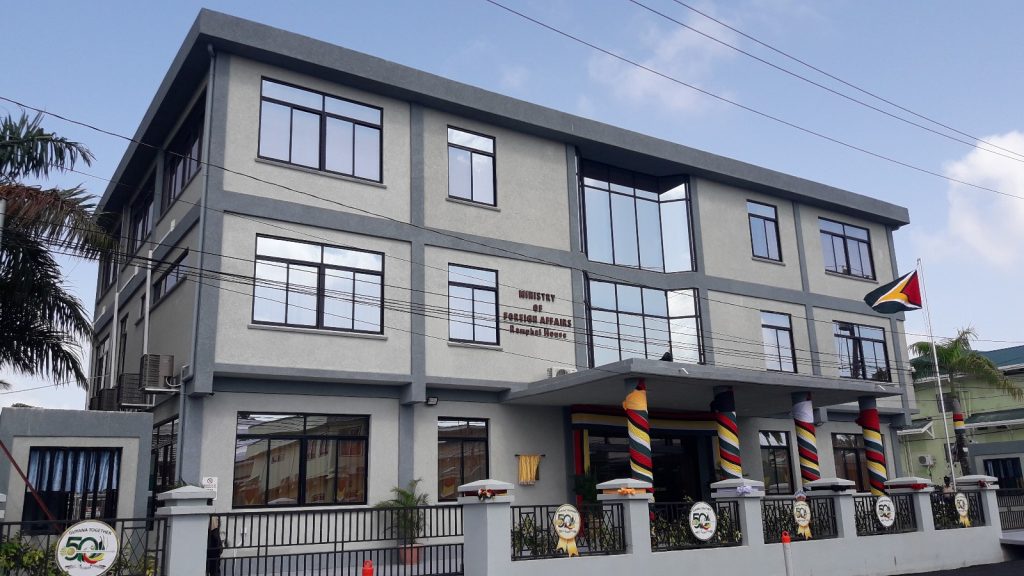 Ramphal House which is the seat of the Ministry of Foreign Affairs’ Consular and Protocol sections and the Foreign Service Institute.

In his address, President David Granger noted that Sir Shridath was one of Guyana’s most distinguished foreign service members and he continues to serve the nation.

“The Cooperative Republic of Guyana saw it fitting that this institute dedicated to educating our country’s cadets and diplomats should be named after you Sir Shridath, one of the architects of Guyana’s foreign relations.” The president added that Sir Shridath’s stewardship and service to Guyana were “incontestable.”

Minister of Foreign Affairs, Dr. Karen Cummings noted that the ministry had been evolving since its establishment in the pre-1966 independence period.

“As we approached independence, the British Government recognised the need to create an institution to carry out the external policies of the new state of Guyana; accordingly they created the Department of External Affairs which had been housed in the Public Buildings.”

However, Dr. Cummings explained that with the expanding mandate of the ministry, its operations were moved to Takuba Lodge with protocol operations housed in the building next door.

That annexe was dedicated to Sir Shridath for his outstanding services to the nation’s diplomatic evolution.