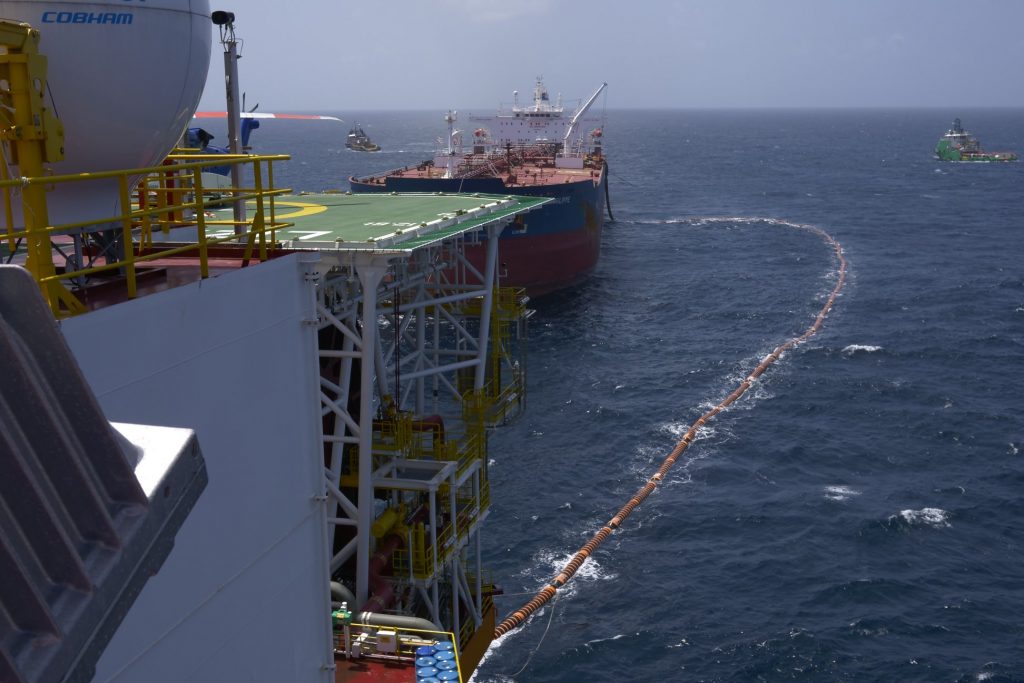 The fuel hose leading from the FPSO, Liza Destiny, to the Cap Philippe for the transfer of Guyana’s first million barrels of crude.

Guyana is this year expected to lift and sell five million barrels of crude oil being extracted from the Liza-1 well from the ExxonMobil-led consortium under the banner of Esso Exploration and Production Guyana Limited (EEPGL), Director of government’s Department of Energy, Dr Mark Bynoe said Tuesday.

“I am happy to say that Guyana is entitled to approximately five million barrels of oil in 2020 alone, plus the two per cent royalty, plus withholding taxes, plus the direct and indirect benefits through employment creation and other revenue-generated income. So, this is not a contract that we should take lightly, it is not an occasion that we should take lightly,” he said aboard the Liza Destiny, a floating, production, storage and offloading (FPSO) vessel.

Guyana government officials have already estimated that the country expects to earn at least US$300 million this year from oil sales.

Bynoe was aboard the FPSO witnessing the transfer of Guyana’s first million-barrel lift of crude onto the oil tanker Cap Philippe, which was chartered by Shell Western Supply and Trading Limited.

ExxonMobil, Hess, and China National Offshore Oil Corporation are each entitled to lifts on a rotational basis as part of the production sharing agreement to recover costs of investments and earn profits. 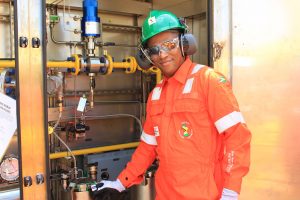 Head of the Department of Energy, Dr Mark Bynoe aboard the FPSO, Liza Destiny.

In an invited comment, while on the vessel, Dr Bynoe iterated that this is a significant moment in Guyana’s history and noted that this first lift is part of the country’s profit oil allocation. He emphasised that this does not include the two percent royalty, which would be paid on gross productions.

“These one million barrels is part of our profit oil allocation. It does not include the two per cent royalty, which would be paid on gross productions. So, even though we are having a million barrels lift in this particular instance, we are also receiving two per cent on all oil that is being produced. This gets us away from the perception that all Guyana is getting under the contract is two per cent royalty,” he was quoted in a news released by the Ministry of the Presidency under which the energy department falls.

Dr Bynoe noted that the offloading takes between 20 to 36 hours and the process is expected to be completed on Wednesday. He added that the required officials from the Guyana Revenue Authority and the Guyana National Bureau of Standards (GNBS) are on board to ensure the integrity of the investment is protected as well as to ensure and provide the level of comfort to Guyanese that the requisite systems are in place to protect Guyana’s interests.

“What has also been happening is that the GNBS has been working assiduously to tag specific meters that are critical in terms of measurement. They have also been working with the operators on the FPSO with regards to calibration so that the measurements that we are getting are precise as far as practically possible, and those tags are to protect the integrity of the system. When GNBS make their checks before they leave and when they return, they are able to ascertain that the system is not tampered with and that Guyana is getting its fair share,” he noted. 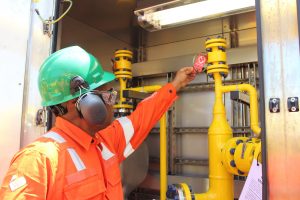 Director, Department of Energy, Dr Mark Bynoe inspects a tag, which was placed on the fuel meter by the Guyana National Bureau of Standards. The tag protects and maintains the integrity of the system and ensures no tampering.

With regard to pricing, as it was previously announced by the Department of Energy, Shell was nominated as the successful buyer of the Government’s first three cargoes, with each cargo being approximately one million barrels of crude. The selection of the successful bidder was based not only on Shell’s global supply and trading capability but also on a competitive sale with favourable payment terms. The sale of the first three cargoes has been concluded on a dated Brent crude oil price assessment, which reflects the tradeable, cash market value of crude oil.

The Department of Energy has also indicated that it will be launching a Request for Proposal (RFP) shortly to recruit a marketing firm, on a term basis, to assist the department in selling Guyana’s future crude entitlement.

Dr Bynoe said the contract does deliver for Guyana and Guyanese and the department is most proud to be part of the process. He said that Guyanese can look forward to even further revenue being generated to take the country along the economic paradigm that it has set itself.

“This has been quite a momentous occasion looking at how far Guyana has come from over the past four years and nine months, from conceptualisation to actual fruition, where we begin to see production. Guyana is having her first lift and given the fact that it is our first lift, this is important to us, not only to see this but to bring the level of assurance to Guyanese that it is no more just a concept, it is actually a reality,” the Director said.