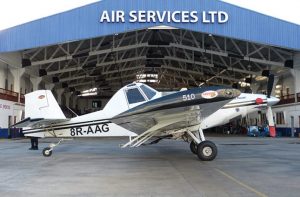 The Thrush Commander-model aircraft that was involved in the incident on Monday, 12th February, 2020. (Guyana Chronicle photo)

GCAA Deputy Director-General, Saeed Suliman told News-Talk Radio Guyana 103.1 FM/Demerara Waves Online News that the airstrip has since been ordered closed ahead of the arrival of investigators. A notice to airmen (NOTAM), he said, has since been issued.

He said the incident occurred between 2:46 pm and 3:07 pm. “The pilot is fine; the investigation has started,” Suliman said. The pilot is John Bart.

Back in December, 2019, an ASL plane, had struck a fence and crashed after take-off at Von Better in Mahaica/Mahaicony.