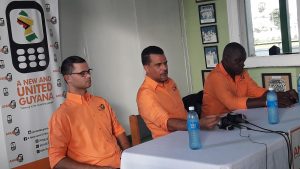 A New and United Guyana (ANUG) says the time has come for the small parties with broad common features to unite to target the estimated 35,000 independent voters who want to bring an end to racial voting and use their seats in the National Assembly to push for policy and legal reforms.

ANUG Chairman, Timothy Jonas said his party has so far secured the backing of the Federal United Party (FED-UP) to contest the March 2, 2020 general elections, but has not convinced the others including Lenox Shuman’s Liberty and Justice Party (LJP).

Jonas said ANUG and FED-UP would be jointly contesting the elections. He could not say what would be their joint name and symbol on the ballot paper until representatives of the two parties hold a joint news conference later this week. He said ANUG’s identity would not be preserved. “I don’t think there is any danger of anyone being subsumed. As subsumed as the AFC (Alliance For Change) has been, they are still identifiable as the AFC so you have two parties which are standalone and self-sufficient and they will be working together. I don’t think there is a fear of loss of identity,” he said.

ANUG Assistant Secretary Kian Jabour said FED-UP was particularly interested in developing a constituency system in which people are actually represented by parliamentarians who they know. “We very strongly believe that our current system in Parliament is not one that represents all Guyanese regardless of who they are voting for and this is where our problem comes in. We have a system that in which the majority of our seats are allocated by political parties and are aligned and because of that those basically become yes-men. They have to follow party lines or they are so removed as we have seen very recently with the no-confidence motion,” said Jabour.

While the hearts of the small parties “are all in the right place,” he said a number of them have not seen the wisdom of contesting the polls under one umbrella and sharing their resources. Jonas credited The New Movement party as a group of young professionals who are “good-hearted sincere people and who want the best for Guyana” and urged Guyanese to support them as an alternative although a few of their ideas are unrealistic.

He said ANUG has not spoken with Robert Badal’s Change Guyana party, but talks are ongoing with the Citizenship Initiative party. “We continue to be in talks with them. We have reached out to them. Members of our executive spoke to members of their executive, That is up in the air,” he said.

Realistically, he argued that small parties could not win general elections in Guyana but could hold the balance of power in the 65-seat National Assembly. He said just over 30,000 of the “independent” voters, who once backed the Alliance For Change (AFC), were now looking for a genuine third party to support. “As a matter of maths, each of those parties will get less than 5,000 votes if they fight among themselves for the independent voters,” he said. Jonas said it was useless small parties, knowing fully well that they could not possibly win an election due to heavy race-based voting, making lofty campaign promises.

For his party, the single most important and realistic promise is to be a broker for the best laws and policies as well as constitutional reform. “If eighty percent of this population continues to vote along ethnic lines, then we cannot pretend to make promises about what we will do in government. We have to take a realistic approach as to what A New and United Guyana can do, given the rules of the game, if it gets enough seats in Parliament to have a swing vote as the AFC had. To do anything more, to make promises on anything else on us getting into government will be to deceive the Guyanese people but deceive the Guyanese people like a schoolboy lies,” said Jonas, a former AFC supporter.

The ANUG Chairman envisaged that the largest small party that makes it into the National Assembly would also play significant roles on state boards and commissions in guarding against decisions that are not in the interest of Guyanese.