Owner of Kosmos at MovieTowne, bodyguard die in accident 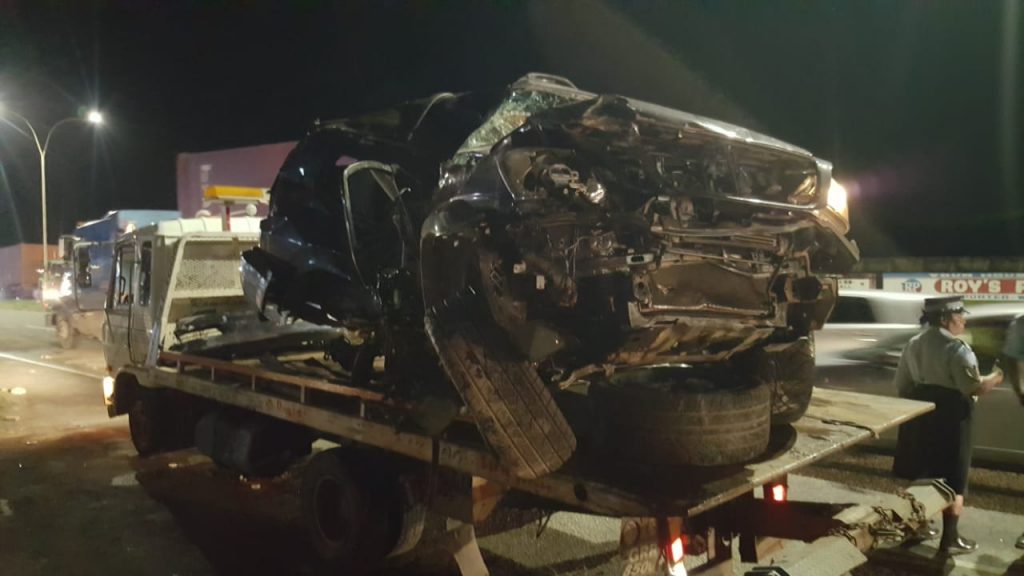 The mangled Lexus SUV being removed from the accident scene.

The owner of Kosmos Grill & Lounge at Movietowne in Guyana and a police officer died in a road accident early Tuesday night on the Rupert Craig Highway in the vicinity of Yokohma vehicle dealership at Sophia in Greater Georgetown.

Official sources confirmed the identities of the two men as 37-year-old Dillon De Ramos of 85 Dennis Street in Campbellville, the owner of Kosmos, and off-duty police officer, 35-year-old  Superintendent of Police Brian Eastman of 1515 Norton Street in Wortmanville.

Guyana Police Force Traffic Chief, Linden Isles confirmed that the accident occurred but did not immediately have further details.

The Guyana Police Force denied a section of an earlier Demerara Waves report that Eastman was off-duty and providing bodyguard services to De Ramos.

“The Officer referred to in the article -Senior Superintendent Brian Eastman , was a serving member of the Force who performed duties at his Office today and
not a bodyguard or an off-duty officer prior to his tragic passing in the horrific accident on the Rupert Craig Highway as was insinuated by Demerara Waves,” the police force said.

Apart from that comment, the police force did not issue a statement on the accident itself.

One theory that is being explored is that the vehicle hit the median, the driver lost control and then it smashed into the vehicle dealership’s fence.

Previous: None of the 420 killings is a cold case -Guyana Police Force
Next: Republic Bank hopes to fix problems by mid-December; apologises for customer delays