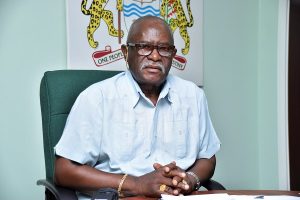 Guyana would be asking the International Organisation of Migration (IOM) and the United Nations High Commissioner for Refugees (UNHCR) for assistance to relocate the more than 150 Venezuelans, including 30 children, who are residing on the eastern dam of the Demerara River, government said Thursday.

Minister of Citizenship, Mr. Winston Felix said government wants to relocate the Venezuelan migrants, who are currently residing along the Demerara River dam between Grove and Herstelling on the East Bank Demerara.

The Minister, along with representatives from the Civil Defence Commission (CDC), distributed food hampers and a quantity of cleaning supplies to both Venezuelans and Guyanese living along the riverside at Grove.

Of the approximately 600 persons living along the sea dam, over 150 are Venezuelan migrants, including about 30 children.

Minister Felix informed that his primary focus will now be on engaging the UNHCR and the IOM on the possibility “of relocating the Venezuelan migrants to more habitable circumstances”.

In some instances, he said, during the relocation process, the migrants sometimes find proper accommodation on their own and would get support from the international agencies.

“So, it depends on what is workable at the time support is given to the migrants. If the migrants find their own [accommodation], well support is given. Similarly, if the international community is instrumental in finding accommodation, they are supported in the same way,” he was quoted as saying in a statement issued by the Ministry of the Presidency’s Department of Citizenship and Immigration.

The Minister noted that since April 2018, the UNHCR reached out to countries neighbouring Venezuela to encourage acceptance and humane treatment of the Venezuelan migrants. He said that the countries are being encouraged not to send the migrants back to their homeland and not to prosecute them.

“So as result of that we have been embracing the Venezuelan migrants however they come. As a result of the policy not to return them we have been …granting them three months stay which is renewable,” he said.

Minister Felix noted that many of the migrants found living along the sea dam may not have gotten their permits and so officials are now examining the circumstances under which they are living. He explained that arriving Venezuelans must go through a two-part process: the Immigration Department, which makes a record and looks after their stay in Guyana and the Ministry of Public Health, which is responsible for health checks and immunisations. The newly found group of migrants, he said, will now have to go through this process.

Minister Felix emphasized that the multi-agency coordinating committee has oversight of the migrant situation. The last report from the Ministry of Public Health, he said, revealed that over 800 migrant children are registered in schools throughout Guyana. Education for the children living along the sea dam will be addressed, in addition to other matters relating to the migrants, including trafficking in persons.

The Minister said there is currently ongoing collaboration with United Nations Children’s Fund (UNICEF), which has shown an interest in ensuring that children are in school and that they are living in hygienic conditions.

With regard to the private sector’s involvement in assisting the migrants, Minister Felix said aid must be coordinated through the CDC.

“The responsibility for resource allocation and assistance to Venezuelan migrants [is] the Civil Defence Commission… So, any person whether local or foreign, even the UNHCR and IOM… the Civil Defence Commission will collect supplies … and then distribute. Most of what would be distributed here had been received directly or through the support of the international agencies,” Minister Felix said.