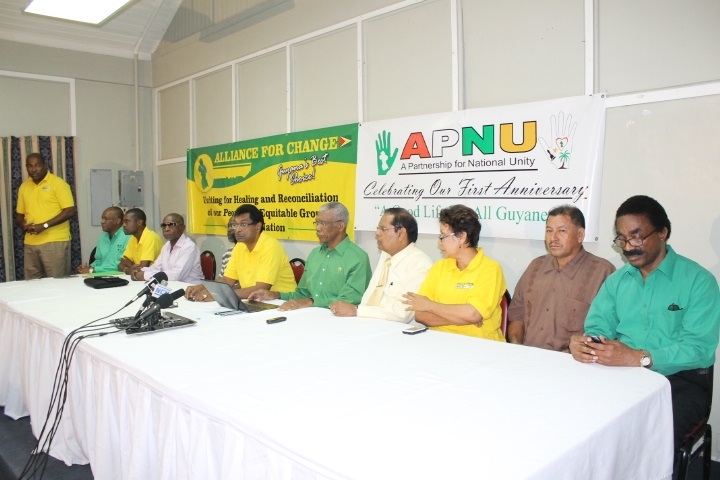 APNU+AFC coalition’s press conference after the Cummingsburg Accord was signed on February 14, 2015.

A Partnership for National Unity (APNU) at a meeting of its five partner political parties Monday evening said it decided on a formula for allocating parliamentary seats after next March’s general elections and a source close to the internal meeting ruled out that smaller party getting 40 percent of the parliamentary seats.

“That can’t work… They lost whatever they had,” said the APNU official on condition of anonymity, in clear reference to a perception that the Alliance For Change (AFC) has lost electoral support since 2015.

Insiders familiar with the talks have indicated that APNU might offer in the vicinity of 30 percent of the seats to AFC if they contest as a coalition.

APNU did not disclose a figure in its statement following Monday afternoon’s talks that were held at the People’s National Congress Reform (PNCR) headquarters in Congress Place. However, APNU said its five partners agreed to a formula for allocating seats after the general and regional administrative council elections.

The APNU five partners are the PNCR, the Guyana Action Party (GAP), the Justice For All Party (JFAP), the National Front Alliance (NFA), and the Working Peoples Alliance (WPA).

“The partners examined several proposals and agreed on a post-election formula for the allocation of seats and recommended an approach for the continuation of negotiations with the Alliance For Change (AFC) in accordance with the core principles already agreed,” APNU said.

APNU stated that Guyana’s constitution would be the backbone of further talks with the AFC.

“The Partners further agreed and recommended that the Constitution of the Cooperative Republic of Guyana will guide all future discussions,” the party said in a statement.

APNU sources said contrary to claims by the AFC, there has been no agreement that AFC Leader Khemraj Ramjattan would be the coalition’s prime ministerial candidate. Mr. Granger has already said that no political agreement could be superior to Guyana’s constitution, and that he enjoys the right to pick his running mate.

Mr. Granger has been reportedly loud in praise for the work of incumbent Prime Minister Moses Nagamootoo.

For its part, the AFC has ruled out changing its nominee for the prime ministerial post, but it was prepared to give a written undertaking in a revised political agreement, the Cummingsburg Accord, that it was not interested in the presidency should Mr. Granger no longer hold office.

The statement comes hours after a meeting that AFC said should have been held with the APNU on Monday. The AFC had gone as far as saying that if Monday’s talks had failed, it would not have agreed to a deadline and would be contesting the March 2, 2020 general elections alone.

Monday’s APNU meeting was chaired by its Chairman, President David Granger and the five parties received a brief from the APNU negotiation team examining the Cummingsburg Accord.

APNU said it “remains committed to ending ‘winner-take-all’ politics in Guyana and to contesting the 2020 elections as a Coalition.”

Tagged with: A Partnership for National Unity (APNU) Alliance For Change (AFC) Constitution of Guyana Cummingsburg Accord parliamentary seat allocation