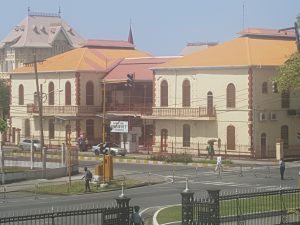 Eight persons, including a medical doctor, were Tuesday charged with the gunning down of well-known gold miner, Deon Stoll.

They were not required to plea to the indictable offence, and were refused bail and remanded to prison.

Chief Magistrate Ann McLennan ordered them to return to court on November 15.

Four of the men – Shane “Demon” Morgan also known as Delon Morgan, Roberto Sankar, Wayne St. Hill and Steve Rollox – were charged with the murder of Stoll in the course or furtherance of a robbery.

Dos Santos, investigators said, treated one of the persons who Stoll shot during the attempted robbery.

Stoll died while receiving treatment at the Georgetown Public Hospital.