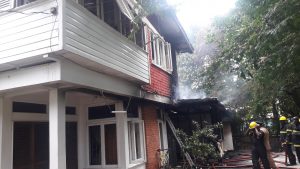 He was rushed to a city hospital, unhurt but affected by the blaze, sources said.

A rear section of the building was badly damaged.

Fire Chief, Marlon Gentle could not immediately say what was the cause of the blaze.

Among those at the scene were former Opposition and People’s National Congress Reform leader, Robert Corbin and Ambassador Cedric Joseph.

Jackson served as Foreign Affairs Minister from 1978 to 1990. He also served as a consultant to the Guyana government in connection with the country’s border claims by Suriname and Venezuela.