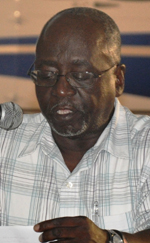 Former Chairman of the Board of the Guyana Civil Aviation Authority, Hugh Denbow has died following a home invasion.

Police said the 63-year old man was found tied up at his house at Bel Air, Greater Georgetown with several neckties.

He was rushed to the Georgetown Public Hospital where he died at about 8 o’clock Monday night.

Police sources said they responded to a report by Manager of Orinduik Development Inc, Brian Backer that since September 21 at about 7:30 PM he tried contacting Denbow by cellular phone but his calls went unanswered .

Police said they and Backer entered the house through a southern door which was push in but unsecured at the time and found Hugh Denbow lying face up “in an unconscious state with both eyes open, in the kitchen area with his hands, feet and neck tied together with several shirt tie.”

Investigators said the entire house was ransacked, but there is no sign of forced entry to the building.

Former Public Works Minister, Robeson Benn, during whose tenure, Denbow served as Chairman of the GCAA, remembered him as someone who was dedicated to the improvement of the aviation industry. “It’s deeply disturbing and a very sad event. I think he was still serving his country by giving assistance to the industry,” Benn told News-Talk Radio 103.1 FM/Demerara Waves Online News.

He said Denbow was always “coming with ideas about how we can continue to improve the industry”.