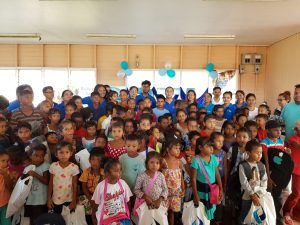 More than 100 primary and nursery school pupils from the Crabwood Creek and Moleson Creek areas in Berbice were outfitted with back-to-school gears for the new school term on Saturday, August 23 at the Crabwood Creek Community Centre popularly referred to as “ballfield”, the bank said Monday.

Manager of the GBTI Corriverton Branch, Mr. Andre Yhap said that this is the second year for the back-to-school program and that the Bank is happy to support the attendance and tooling of the school children in the communities they serve.

He noted that this is a reciprocation of the support accorded to the Bank over the years by the community. The inaugural distribution program was held last year at the Scottsburg Community Centre Ground in Corriverton where the Bank provided uniforms and stationery to approximately 76 students. This year the Bank touched 42 students each receiving uniforms, stationery and bags, and another 36 students received stationery items.