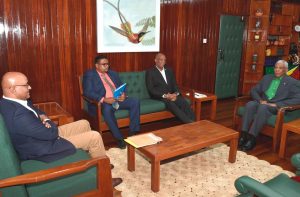 President David Granger on Friday predicted a “gridlock” in the process for arriving at six acceptable nominees for the post of Chairman of the Guyana Elections Commission (GECOM), saying that he was ready to talk with Opposition Leader Bharrat Jagdeo about the president’s role in “crafting” the list of nominees.

“I’m prepared to meet the Leader of the Opposition to resolve any problems that might arise at present. Although I use the word ‘gridlock’—it might be a strong expression—I do feel that there might be a misunderstanding on the part of the opposition and I’m prepared to sit with the Leader of the Opposition to arrive at an interpretation of what the CCJ (Caribbean Court of Justice) said.

“As far as I’m concerned, the interpretation is quite clear and it means that the President must have a role, must have a role. That is the word the CCJ used—’must have a role’—and I would resist any attempt to prevent me from exercising that function that has been given to me by the CCJ. The role of the President in the crafting and hammering out of a list must be respected,” Granger was quoted as saying in a Ministry of the Presidency production titled “Public Interest”.

The Opposition Leader’s office explained that after the President’s emissaries submitted eight names, Jagdeo had taken the position that there was no need to discuss them further, not that they would have been placed on Jagdeo’s list. The Opposition Leader’s Office told Demerara Waves Online News that the President’s representatives later said that not all eight names were acceptable and so they withdrew six and suggested Attorney-at-Law Kesaundra Alves and Retired Justice Claudette La Bennet.

Jagdeo has said he nor the President is obliged to give reasons for rejecting suggested nominees. The opposition People’s Progressive Party has said that it would be contradictory for the President to approve his own nominees as acceptable, while it is the constitutional role of the Opposition Leader to submit six nominees that are acceptable.

But the President thinks otherwise: “It is very important that we pay attention to the spirit and the letter of the consequential orders; that is to say the President must be given, not may be given, a role and it means that I have to be involved in the selection of nominees before those nominees come back to me. It is no longer a one-sided affair, it is no longer unilateral; it is consensual and both government and the opposition have to be involved,” he said.

The President has since accepted four of Jagdeo’s nominees. After Jagdeo rejected retired Justice La Bennett and Alves, he proposed four other names to the President. High-level sources have told Demerara Waves Online News that the President had long preferred La Bennett for the GECOM Chairmanship over James Patterson who resigned after his 2017 unilateral appointment by the President was deemed by the CCJ as flawed and unconstitutional.

Since Tuesday, there have been no talks between the President and the Opposition Leader or their representatives. Granger cautioned that if there is no resolution to the way the CCJ ruling is being interpreted to exclude him, there would be an impasse. “Unless we accept that principle, we would end up in gridlock and that is what we’re heading for if the Opposition continues to deny the President a role in hammering out that list,” he said.

President Granger stressed that the CCJ ruling provides him with a role in selecting the nominees whose names would then be formally presented to him by the Opposition Leader for one person to be appointed to chair the seven-member elections commission.

The President has repeatedly said he was committed to general elections at the earliest possible time.