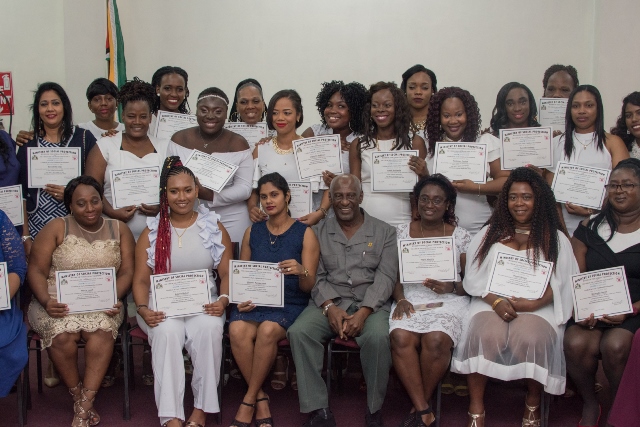 Minister within the Ministry of Social Protection, Keith Scott with the thirty graduates

Thirty Early Childhood Development practitioners received their certificates after a nine-week practical exercise that focused on the importance of early childhood development from zero to three years.

The programme was facilitated by the Childcare and Protection Agency (CPA), UNICEF and the Board of Industrial Training (BIT).

At their graduation held at the National Library Conference on July 17, BIT Human Resource Officer, Kathy Smith noted the facilitators’ satisfaction with the successful completion of the course by the 30 graduates.

“The collaborative effort with UNICEF is just the beginning of a new road for childcare practitioners in Guyana. You must know, that many organisations and institutions are calling for affordable training and we are pleased to be able to deliver such,” Smith was quoted as saying by the government’s Department of Public Information.

In his remarks, Minister within the Ministry of Social Protection, Keith Scott described childcare providers as the “above-ordinary worker” since they are responsible for the safety and guidance of the children in their care.

The minister further explained that their certification now allows them to work in Guyana and throughout the Caribbean region. He said this is largely due to the efforts of BIT since prior caregivers could not move from country to country.

A number of the graduates said, before embarking on this course, they worked as teachers and junior caregivers with several daycare service providers but decided to take the bold step to seek further advancement in early childhood development.

“The programme was valuable and we learnt so much that we will take with us forever, as we were given this opportunity to provide families and communities with the service needed,” said Anganie Mohan one of the certified practitioners.

To better address the low percentage of early childhood delivery, Guyana has committed to implementing the Caricom Regional Framework for Early Childhood Development.