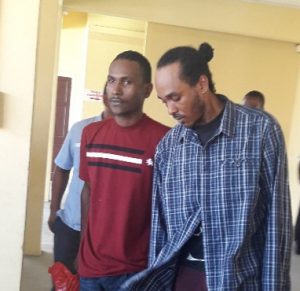 Five men were Monday charged with the murder of a money changer and his daughter outside their Better Hope, East Coast Demerara home. 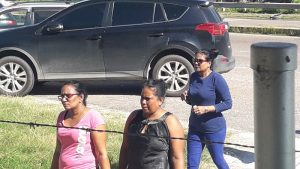 The wife of the money changer and other persons entering the Sparendaam Magistrates’ courtyard.

The men are accused of the murder of the Latchmans on July 4. Investigators were told that the Latchmans were shot several times and a bag of money snatched from them.

Sparendaam Magistrate, Alisha George remanded the quintet to prison until August 15 by which time statements are expected to be provided. They were not required to plea to the indictable offence that is punishable by very long prison terms. The death penalty remains on Guyana’s law books for treason, terrorism and the murder of members of the joint services in the execution of their duties.

The men appeared in court under tight security. Police armed with rifles were strategically positioned around the courtyard.

The accused were not represented by a lawyer, and they were told that they could make arrangements for services of counsel.