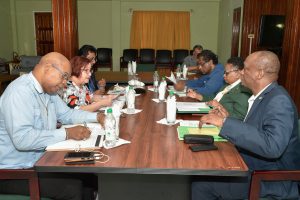 At today’s meeting, the government side was represented by Vice President and Minister of Public Security, Khemraj Ramjattan; Minister of Public Health, Volda Lawrence and Director-General Harmon. Opposition representatives were Chief Whip of the PPP/C, Gail Teixeira and members of Parliament Anil Nandlall and Juan Edghill.

President David Granger has submitted eight names to the Parliamentary opposition for its consideration, as the two sides continue the search for a Chairman of the Guyana Elections Commission (GECOM), government’s Department of Public Information reported Monday night.

Patterson’s unilateral appointment by President Granger had been declared flawed and unconstitutional by the Caribbean Court of Justice (CCJ).

Director-General of the Ministry of the Presidency, Joseph Harmon Monday said that in addition to the list of 11 persons submitted by the Leader of the Opposition, the Head of State has suggested that the eight names be considered in the “hammering out” process.

The two sides will be working to identify six names. This, the Director-General said, should be done in the shortest possible time.

“We believe the consensual process contemplated by the CCJ and providing clarity in the Articles in the Constitution requires us to meet in this way so that we can find a consensus,” he told the media outside Castellani House.

According to the Director-General, the meeting between the two sides is important to all of Guyana “to have a Chairman of the Commission that both sides can find their decisions fair and representing the best interest of the people of Guyana”.

At a post-meeting press conference last Thursday, President Granger iterated that the Leader of the Opposition is free to present the names that have already been submitted on the past three lists, and he has also agreed to confirm that those persons are still willing to have their names forwarded.

The Head of State also clarified that the Constitution of Guyana stipulates the requirements of who is ‘fit and proper’ to be selected for the position of the chairman of GECOM.

Opposition representatives were Chief Whip of the PPP/C, Gail Teixeira and members of Parliament Anil Nandlall and Juan Edghill.

The two sides will meet again on Tuesday, July 9.