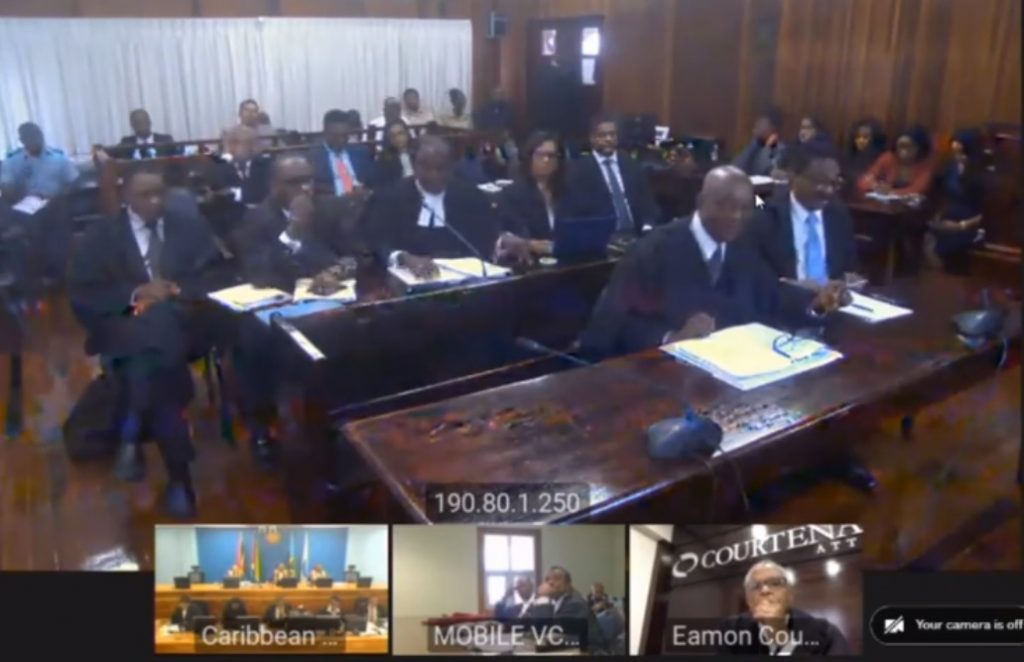 Lawyers for the parties at the Guyana Court Appeal participating in a video-conference link-up with the Caribbean Court of Justice.

The Caribbean Court of Justice (CCJ) on Monday gave President David Granger and Opposition Leader Bharrat Jagdeo as well as their lawyers more time to possibly arrive at a consensus, even as the Guyana Elections Commission (GECOM) said elections would not be possible until after December 25.

President of the CCJ Justice Adrian Saunders said the Court would issue its consequential orders on July 12, but before then he gave the parties more time to meet. They are also required to prepare 10-to-20-page written submissions on the type of orders they would prefer on or before July 1.

“We will again hope that the Leader of the Opposition and His Excellency, the President can meet and can find some consensus if not on all the issues, on some.”

Jagdeo is adamant that elections must be held with the existing voters list, while Granger first wants house-to-house registration for the creation of a new list before Guyanese go to the polls.

GECOM’s lawyer, Senior Counsel Stanley Marcus told the court that a new voters’ list would be ready by December 25 for elections to be held any time after that, prompting Justice Saunders to describe that situation as “disappointing”.

Justice Saunders noted that the elections should have been held by March 21 and so for him the question was, when is the earliest that they could be held “given some amount of give and take on both sides” taking into account that as many eligible voters must be allowed to vote and elections must be held within 90 days of the successful passage of a no-confidence motion?

Although the CCJ found that President Granger’s unilateral appointment of James Patterson as GECOM Chairman was flawed and unconstitutional, Saunders said the court “as presently constituted” could not issue a consequential order for the removal of Patterson. Jagdeo’s lawyer, Senior Counsel Douglas Mendes told the court that Patterson was still on the job and presiding over meetings.

Attorney General, Basil Williams indicated that once the President is properly advised about GECOM’s readiness, the Guyanese leader enjoyed the constitutional right to dissolve Parliament and name an elections date. “To propose that someone else gives the date for national elections would collide, unfortunately, with that….If there is no agreement, for example, to go for the two-thirds resolution because our belief respectfully is that those three months have been overtaken; whether they are directory or mandatory, they have been overtaken and, therefore, if we can’t get together in the Parliament to get the two-thirds majority, then of necessity, the President, being given the power under the constitution to name an election date and dissolve Parliament, should—and this is the order—should have consultations with the Elections Commission, dissolve the National Assembly and general and regional elections should be fixed by the President,” Williams said.

The Attorney General complained that GECOM’s major humbug were constant boycotts of meetings by a number of elections commissioners.

Justice Saunders lamented that Guyana’s two political leaders appeared reluctant to find a resolution by conforming with the rule of law through compromise and reasonableness. “Everybody says these are important issues but it seems as though the same degree of urgency and deliberation that are expected from the courts, we don’t see them being reflected in the behaviour of the political directorate and that, I think, is unfortunate,” he said.

Justices Saunders, Wit and Anderson tried desperately to get from the GECOM lawyer, Marcus what would be an outside date and an inside date for the holding of elections but he insisted that GECOM would not be ready and had already spent more than GYD$700 million and trained about 9,000 persons to conduct house-to-house registration.

Marcus said it is for the Parliament to decide if the timeframe for elections should be extended beyond the 90 days rather than the court setting the date. Marcus warned that everything should be done to ensure that there are acceptable elections otherwise the parties would return to the court under different grounds.

The CCJ President emphasised the importance of the two sides reaching an agreement. “This case puts the court in a very awkward position because we don’t want to make political decisions but at the same time, we feel that it is our remit to assist in seeing the rule of law observed in Guyana but the observance of rule law also requires political actors to conform with the rule of law and to demonstrate a spirit of compromise and reasonableness that allow for the rule of law to take effect,” Justice Saunders said.

Attorney General Williams told the CCJ, by video conference from the Guyana Court of Appeal, that only house-to-house registration could properly delete and add persons from the voters’ list in accordance with the relevant laws.

Senior Counsel Mendes wants the CCJ to name an elections date within 90 days and use the existing voters’ list which expired on April 30. Concerning the future of the Elections Commission Chairman, Mendes wants the regional appeal court to give the President and Opposition Leader one week within which to name a new chairman.

But the Guyana Attorney General argued there was no need to put a time constraint on picking a new GECOM Chairman.