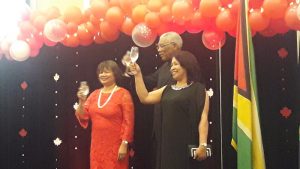 Canada on Monday announced plans to established a business chamber in Guyana, as several Canadian companies step up preparations to search for oil offshore the South American nation.

Canada’s High Commissioner to Guyana, Lilian Chatterjee made the announcement at a reception at the Marriott Hotel to mark her country’s 152nd anniversary since three provinces came together to form that North American country.

“In recognition of the growing Canadian presence in Guyana, I am pleased to announce tonight that we will be launching the Canadian Chamber of Commerce Guyana,” she said.

The Canadian envoy said the business organisation would be launched later this year, but meanwhile interested persons could contact the Trade Commissioner at the Canadian High Commission in Georgetown.

Chatterjee informed that Canada is Guyana’s largest trading partner and that many Canadian businesses sponsored the reception. They included Scotiabank, Canadian Bank Note as well as Ontario-headquartered offshore oil drillers, CGX Energy, JHI Associates and Eco-Atlantic. Added to the list are 12 partnerships between Canadians and Guyanese in the oil sector. 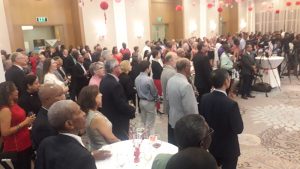 A section of the attendees at Monday’s Canada Day reception.

The Centre for Local Business Development reportedly says more than 60 Canadian companies are registered with that entity.

In addition to Guyana Goldfields/Aurora Gold Mines, she said Guyana Gold Strike, Sandspring and Reunion are engaged in mining operations at various stages of development.

Thousands of Guyanese live in Canada and account for remittances totaling more than US$208 million dollars over the past five years.

The American Chamber of Commerce Guyana was launched in August, 2018.